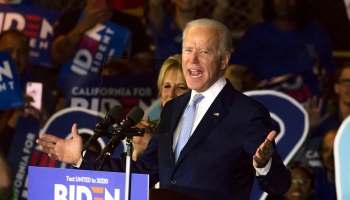 On the same day as America went to the polls, current president Donald Trump’s move to withdraw the US from the 2015 Paris Climate Agreement came into effect.

But with President-elect Joe Biden promising to reverse the decision – as well as making bold statements on his plans for building a “more resilient, sustainable economy” – the climate change issue shows no signs of becoming less controversial in the US.

As the dust settled following the tense few days of vote counting it took for Biden to reach the crucial 270 electoral college votes, asset managers spoke out to voice their views on what the new president would mean for socially responsible investing.

Much will depend on the final shape of the Senate and Congress, as this will dictate how much Biden and the Democrats are able to enact. Without the ‘blue wave’ that many commentators were predicting before the election, sweeping policy reforms could be difficult.

Biden’s campaign pledged a $2 trillion “accelerated investment” over the next four years to “meet the ambitious climate progress that science demands”.

However, without the support of the Senate, Gilles Moec, chief economist at AXA Investment Managers, said it was “unclear” how the investment could happen.

“The President-elect’s bi-partisan credentials can help him to secure deals with some moderate Republicans in the Senate,” Moec said. “They are an endangered species, but a few are remaining – e.g. Mitt Romney, Lisa Murkowski, Susan Collins. Still, they tend to be run-of-the-mill fiscal conservatives.”

Christopher Smart, chief global strategist at Barings and head of the Barings Investment Institute, said there could be a “dramatic shift in federal efforts on climate change” ahead of an expected return to the Paris Agreement.

“The complex effort to reverse much of the Trump administration’s deregulation will begin soon thereafter, even if sweeping legislation proves difficult,” he said.

However, Colin Moore, global chief investment officer at Columbia Threadneedle Investments, played down the long-term significance of the election result.

“For many investors, divided government is the preferred outcome,” he argued. “I believe elections and subsequent policy changes rarely affect the long-term direction of market averages because they rarely lead to dramatic change in how the broad economy functions.

“However, policy may impact individual business sectors significantly, creating winners and losers. As an example, potential policy changes in healthcare policy tend to affect investor attitudes to hospitals and pharmaceuticals in different directions.

“A conclusion to the election will allow elected leaders to focus on the critical task of crafting additional aid to address the economic damage created by the pandemic, and we may see volatility until that occurs. While Biden moves closer to assuming the presidency, his ability to implement some policy proposals may be limited by a divided government. Regardless, it makes sense for investors to stay focused on long-term goals.”

Stefan Kreuzkamp, chief investment officer at DWS, agreed, adding that the transition away from traditional carbon-intensive industries was already being priced in by investment markets regardless of political leadership. President Trump’s support for the oil industry had “done little to help it in the face of the shift to to greener energy and global overcapacity”, he added.

“The sectors favoured by Trump in 2016 – steel, oil, coal, and hotels and real estate – have in fact largely performed worse than the economy as a whole,” Kreuzkamp said. “Ultimately, political conditions are only one factor among many that influence the economic prospects of a sector, and perhaps a smaller influence than one might think.”