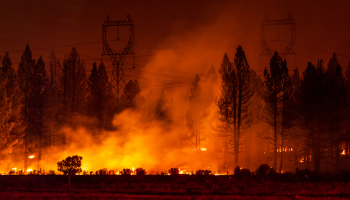 The UN has issued a “code red for humanity” warning to the world with the publication of a landmark study into the impacts of climate change.

In a report entitled ‘Climate Change 2021: The Physical Science Basis’, the UN has found evidence of “unprecedented” and “irreversible” environmental changes.

Due to human activity, extreme heatwaves, droughts and flooding have become more likely. Heatwaves have hit much of Canada this year, while deadly floods have struck Germany and wildfires are raging across Turkey, Greece, Russia and several other countries around the world.

The UN report is the first major review of the science of climate change since 2013 and has been published less than three months before the key climate summit COP26 is held in Glasgow, Scotland.

Professor Edward Hawkins, one of the report’s authors, said the findings of the report could not be any clearer.

“It is a statement of fact, we cannot be any more certain,” said Dr Hawkins, “it is unequivocal and indisputable that humans are warming the planet.”

The findings have caused widespread concern throughout the responsible investment community.

“It’s incumbent upon the financial services industry to assume greater responsibility and act as powerful drivers for much-needed climate action,” said Grew, who remarked that collaboration would be vital to correcting this course.

“We must evaluate climate risk, engage with companies, vote for climate action and continue to decarbonise our portfolios. The sum of these actions sends an unequivocal message that we recognise the importance of managing climate risk for our clients, employees, stakeholders and the environment. Many have done so already, but we would encourage all asset managers to sign up to the Net Zero Asset Managers initiative as a first step.”