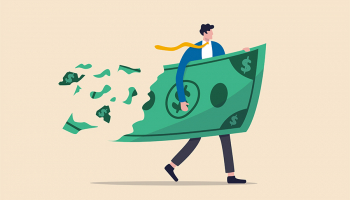 Over 50% of bankers are positive about future economic conditions in the US – but many are increasingly concerned about the impact of higher inflation.

Of the CEOs, presidents, and chief financial officers from at 473 banks across the US that were polled, 71% said their institutions had improved their economic conditions and more than half of them expected further improvements during the upcoming year.

The survey, conducted by IntraFi Network, also found that despite previous concerns about the effects of COVID-19, almost 80% said they planned to return to pre-pandemic branch strategy and operations.

However, half of executives at banks with assets of $1 billion or less were concerned that the housing market in its current state could pose a serious risk to the US economy. This compared to 38% of those at banks with $1-10 billion in assets.

Of the surveyed bankers, 41% said that the recent spikes in certain sectors show that inflation could be a real concern in the future. Consumer prices rose 5.4% in July from a year earlier, according to the most recent data from the Department of Labor – the same level as June and the highest year-on-year increase since 2008.

More than half of respondents expected loan demand to increase and almost a third expected deposit competition to increase in the next year. Views as to the future of funding costs were mixed, with 25% estimating an increase and 25% a decrease.

One of the increasing concerns noted among bankers was ransomware attacks, with 98% saying it was a concern for their own bank.

According to a recent report by Fitch, US banks face material risks from ‘systematic’ cyberattacks despite being able to withstand average modelled cyber risk losses. It was found that attacks on technologies such as operating systems and cloud service providers could have a ‘cascading impact’ on connecting banks, meaning banks will have to have a greater understanding of the risks.