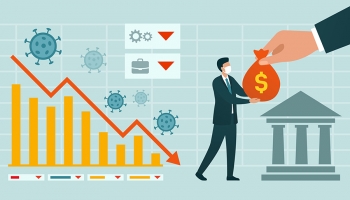 Banks and lenders have so far avoided experiencing high delinquency rates on loan books – but this effect is likely only to be temporary, according to credit rating agency KBRA.

The delinquency rate on auto loans fell month-on-month and year-on-year in April, according to the agency’s research, which KBRA described as “extraordinary” against the backdrop of the economic impact of the COVID-19 pandemic.

The US’s unemployment rate spiked to 14.7% in April and is expected to have risen to 20% in May.

However, lenders moved quickly when lockdown measures were implemented in March and April to grant various forms of temporary relief to borrowers, such as forbearance, waiving fees, or suspending foreclosures.

While such measures could be helpful tools to reduce defaults and delinquency rates, KBRA said, if they were not used properly, they would only serve to delay the recognition of losses.

The credit rating agency found that approximately 95% of prime auto loan customers who received some form of relief in April were already overdue on payments by up to 29 days. For non-prime borrowers the rate was 80%.

“This suggests that lenders are not managing the timing of losses by giving already serious delinquent borrowers a loan extension,” KBRA said. Instead, providers were focusing on helping borrowers navigate “short-term financial difficulty”.

The agency observed similar trends in the unsecured marketplace consumer loan space. Loan modification rates reported by providers ranged from 9.2% to 17.6% in April, KBRA reported, a significant increase when compared to previous months.

The highest rates of modifications to loans were observed in states heavily reliant on tourism, KBRA pointed out, including Florida, Nevada and Hawaii.

Car sales hit a 30-year low in April, according to automotive sales company Edmunds, while interest rates on loans reached a seven-year low.

The annual percentage rate on new vehicles averaged 4% last month, Edmunds reported, down from 4.3% in April and 6.1% in May 2019. Finance offers with 0% APR made up 24% of all new purchases, down from 25.8% last month but still near all-time highs. The average length of loans is also near an all-time high, Edmunds said.

Software provider Black Knight reported last week that more than 4.65 million US households were in forbearance due to the pandemic, equal to roughly 9% of all mortgages and just over $1 trillion in unpaid principal balances as of May 19.

However, the rate of increase in these figures was falling, Black Knight found, implying a shift in focus from pipeline growth to management.