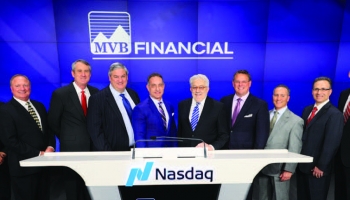 According to a statement from MVB Bank’s parent company, MVB Financial Corporation, the combination — to be rebranded Intercoastal Mortgage — would create one of the largest independently owned residential mortgage lending operations in the mid-Atlantic region.

ICMC has been working with Potomac Mortgage Group, the bank’s specialist mortgage arm that is also known as MVB Mortgage, through a shared services platform Lenderworks since 2013.

“Timing is everything with the 10-year treasury at a near all-time low, and this unique opportunity with Intercoastal Mortgage allows us to take a smaller piece of a much larger pie for greater returns for the short and long term,” said Larry Mazza, CEO and president of MVB Financial Corporation.

“This strategy is one more example of how MVB Financial has explored creative ways to enhance shareholder value. This new relationship positions MVB to have a larger share of one of the best markets in the nation and to gain synergies and economies, as well as technology, partnering with the phenomenal Van Metre Company, one of the best trusted partners you can have.”

Once the deal has completed, following regulatory approvals, Ed Dean — currently CEO of MVB Mortgage — and Peter Cameron, the company’s president, will become the CEO and president, respectively, of Intercoastal Mortgage.

Dean said the two companies had seen record volumes in 2019 of $3.1 billion in total, and this had continued into 2020.

“We are highly compatible in our philosophies, our technologies and the management of our lending practices,” Dean added. “In a market where scale is of the utmost importance, we feel this transaction positions us to achieve significant growth in the coming years.”

ICMC said it would focus on northern Virginia post-transaction, where the housing market remained “robust”. Construction lending opportunities in this area would “continue to expand”, the company added, as well as in North and South Carolina, West Virginia and Tennessee. MVB Mortgage closed over $270 million worth of construction loans in 2019.

The companies also said that “numerous synergies will be created”, enhancing the combined entity’s scale and ability to serve customers “with greater options and shorter turn times”.

“The new company intends to examine its processes with a continued focus on the customer experience,” the statement said. “A majority of the synergies will be non-labor with the intent of applying any displaced labor resources in new growth areas.”