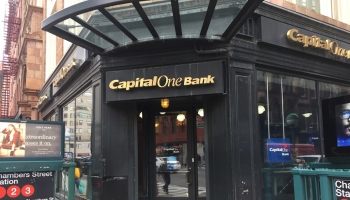 US banking giant Capital One Financial Corporation is to close a further 37 branches as it continues to decrease its physical presence in favor of digital customer offerings.

According to applications filed with the Office of the Comptroller of the Currency, Capital One — which is the 11th largest bank in America — is to shut down nearly 40 branches across the country.

The bank has been steadily cutting its branch network, axing over 50 percent of its branches over the past decade.

In 2016, the company closed over 80 branches between July and October alone, stating it was optimizing the format and number of branches to better meet the evolving needs of customers as banking goes digital.

The firm now has just under 500 branches in the US as of the end of 2019, with the majority situated in key regions including New York, New Jersey, Washington, Texas, Maryland and Virginia.

However, its move away from traditional bricks and mortar hasn’t as yet affected the bank’s profits, with the firm announcing a 2% increase in net revenue for 2019 to $28.6 billion.

Its share of deposits also remains healthy, with customer deposits up 12% to $36.3 billion last year.

In a statement, Capital One spokesperson Derek Conrad said the bank was responding to changing customer behaviors.

“The banking industry’s delivery model is being re-shaped in response to customer demand, and Capital One is also evolving to address that need,” he said. “Our banking model is balancing digital and in-person options to align with customer behavior.

“Our customers are increasingly engaging with us digitally. We continue to see steady growth in mobile banking, online banking, enhanced ATMs, remote deposit capture, etc, however, we know that many customers still value some physical presence to provide assurance, advice, and the ability to facilitate and support some transactions. We do too. Our goal is to deliver a compelling and optimal customer experience across all channels, not just one.”

Capital One was adapting its delivery model, Conrad continued, just as many other bank were re-shaping branches in response to greater demand for simple online services.

He added: “We recognize the importance of ensuring that the evolution of banking doesn’t inadvertently leave someone behind. We believe that digital products and tools can provide a more tailored, personal and accessible service for customers — and will ultimately increase access — and we will continue to focus on bridging digital and other barriers to ensure everyone has access to the banking system.”

A great number of other banks — including Bank of America, JPMorgan, Zions Bancorp and Huntington Bancshares — are investing heavily in technology upgrades.

Capital One’s strategy follows a wider trend in the banking industry to slash branches as consumers increasingly turn to the convenience of online banking, with big name banks such as Wells Fargo, Bank of America and US Bank all making significant branch cuts in the past year.