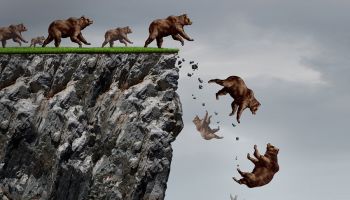 Masanari Takada, a Nomura Macro and quant analyst boldly stated that a sell off that could send banks and the market for a “Lehman-like” plunge is standing by his prediction.

While most analysts are showing some signs of concern for the economy, few are going as far as Takada. He stated that there was no reason for optimism that a sell off could be averted in the next week. He stated on Monday, “The U.S. stock market especially is facing its greatest test of the year thus far.” He is basing his analysis on quantitative data, although other quant specialist managers such as AQR have not echoed his pessimism.

If Takada is correct, it comes at a precarious time for the United States market as Labor Day weekend is coming up which already has a traditionally low level of volume which can make markets more susceptible to a violent swing. The 2008 crisis came in a similar time of year, with a drop of market value that was more than 1/3 of the market. While the market was the shakiest since the Great Depression at the time, it bounced back with one of the strongest decade in stock market history, and notably strong overall stability for America’s banking industry.

While the market had healthy gains to start the week with Trump indicating optimism that a trade deal with China would likely take place, Takata continued to compare and contrast today’s market with 2008. “The correlation between sentiment then and now remains quite high. Even the passing risk-on phase after the initial shock of the yield curve inversion and the risk-off mood that struck on 23 August neatly track the pattern recorded in 2008. If this uncanny resemblance between the two patterns continues to hold, sentiment could soon fall to a level not seen since December 2018.”

While Takata’s position is noteworthy, the United States banks seem more poised to withstand a major market correction than in 2008.

If anything, sentiments such as Takata’s may have its biggest effect on how banks lend to consumers even if mortgage rates continue to decline.

Consumers can only take advantage of better rates if financial institutions are willing to lend.