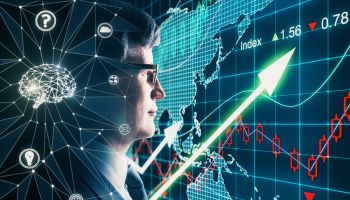 A view across 4 waves of disruption in banking

How much disruption has already happened in financial services, and how much more could take place? By my estimation, the needle is only at 5 to 7 percent. There’s a lot more to come, as I see it. Banking is still in the earliest stages of disruption—there will continue to be several waves of disruption in this industry, potentially leading to the end of banking as we currently know it.

Clearly, fintech startups continue to bite at the ankles of banks, taking away pieces of business. As disruption approaches 100 percent—full-scale disruption—what will be left of banks as we currently know them? I’d like to discuss four disruptive waves that fall on a timeline somewhere between the near distance of the rearview mirror and the foreseeable horizon ahead. While there will doubtless be others beyond what we can see, these four—digitization, open banking, AI, and blockchain—can serve as a springboard to launch a discussion on disruption in banking in general, and in particular how each wave might affect the customer relationship.

Wave One of disruption is well known, so I’ll just skim it lightly to provide a context and sense of trajectory.

A few short years ago, banks were still talking about ‘automating’ manual processes; customers had become used to getting cash from ATMs and, to a certain extent, doing some of their banking online. This evolution was proceeding at a fairly orderly pace. Then suddenly, automation was replaced by a new term: digitization. And we started to see the emergence of PayPal and other quasi-banks that conducted business strictly online—a serious disruptive threat to the banking industry that starts our discussion.

Largely due to the rise of the internet and a consumer population that has come to expect a return on providing access to their personal data, banks are now well along on the journey of digitization. Getting away from keeping records on paper and rendering them into an electronically accessible format—automating—was the first phase of this task. For most banks, this task is almost complete.

As part of digitizing records and other data, banks have been closing down local branches in an attempt to disrupt themselves into a becoming a more digital channel for their customers. Again, we’re approaching the end of that cycle—and the customer relationship in the wave of digitization could best be described as a shift from trusting investor to demanding consumer.

The tidal wave of data and concurrent possibilities unleashed by social media have fueled the digitization trend. As banks wake up to its possibilities, consumers are starting to gain more of a handle on their own data and the use to which it can be put. Increased access to data has in turn opened the floodgates to a plethora of tiny, quasi-banking startups that are building apps with offerings over and above basic banking services. This disruptive wave is just beginning, with startups such as Monzo and Yolt taking away traditional banking customers’ attention and loyalty.

So the second wave is really kicking in now for banks, with open banking—in the UK, the version of open banking that has been adopted is known as PSD2. Banking customers are starting to get more access to, and control of their own data—data that is now more easily accessible to other parties. This is where the aforementioned startups are getting the juice to build a whole host of applications, for offerings on top of what traditional banks will be able to offer through open banking. Banks will have to step into transparency and comparison with competitors—territory that may be uncomfortable for them.

The complex and somewhat hazy banking regulatory conditions in the U.S. will surely add to the strength of these small disruptors. Consider that American banks must receive a charter, but they can choose to be chartered at a State level or a Federal level—or both. Without a charter, a company cannot call itself a bank, but there are few other apparent restrictions on what it can do—think of the services PayPal is able to offer without calling itself a bank. And that is the tip of the iceberg, particularly with the Office of the Comptroller of the Currency (OCC) taking the lead on a federal license for fintech firms, and the State of New York challenging the OCC's FinTech charter decision.

The current disruptive wave of open banking is really challenging the question, What are banks for, and what is the customer’s relationship with banks? Because the fintech startups are starting to offer a new value proposition, customer loyalty is beginning to shift away from banks. Since the financial crisis, consumers became increasingly distrustful of banks, laying the ground for some disruptive changes.

And now we get to where the tectonic plates really start to move beneath us.

In the not-too-distant future, artificial intelligence (AI) will be a way for banks to get closer to their customer again by creating more personalized, AI-enabled products and services. However, while banks will be getting closer to their customers, it will come at significant cost to their own human capital, as about 1.2 million bank workers are expected to be displaced by AI — 70 percent of them in front office positions, as they will be replaced by chatbots, voice assistants and automated authentication and biometric technology.

This third wave of disruption will be characterized by the layering of artificial intelligence on top of current data-enhanced offerings. If open banking is an entrée for banks to become more like marketplaces, enhancing that with AI will eventually allow for much more seamless and accurate application processes and risk assessments, more in-depth communications with customers via virtual assistants, and so on.

To this point, the World Economic Forum (WEF) recently identified several ways that AI could disrupt deposits and lending in banking. First, by focusing retail banking on improving customer outcomes,. In this application, AI can use machine learning to predict cash-flow events and proactively advise customers on their spending and saving habits. AI could cause further disruption by increasing the efficiency and scaleof retail lending—for example, by streamlining the end-to-end onboarding process to more efficiently evaluate and issue new loans. Third, AI could offer automated working capital solutionsfor commercial clients, for example, by using advanced analytics to understand a broader set of data to better adjudicate commercial lending.

In terms of improving customer outcomes, personalization through AI could become a competitive weapon. Banks sit on enormous quantities of customer data, which can be used to create real-time solutions and recommendations. Machine learning can model the characteristics of a customer and predict their preferred interactions, products, platforms of engagement and, in the case of investments, even types of investments such as stock choices. In short, AI will help banks to tailortheir interactions with customers.

To the point of increasing efficiency and scale, while many banks began driving efficiencies in the back office through Lean Six Sigma processes and the like, they subsequently moved on to Robotic Process Automation (RPA) and are now exploring Intelligent RPA, where AI is tentatively being woven into the process. Once AI matures further, significant efficiencies can be gained in the back office. In turn, this will allow the most efficient institutions to turn cost centers into profit centers, whereby they shift back office operations into external services—not unlike Amazon Web Services. For banks, however, the issue is that this requires significant scale, as AI requires major upfront investment and vast quantities of data. This is likely to place midsize and small banks and credit unions at a significant competitive disadvantage, resulting in ng to a wave of industry consolidation.

Banks will feel the brunt of AI disruption as they work hard to regain customers who left, as well as acquire new ones. Only by creating much more personalized products and offerings will they win back some of the loyalty that is now going to tiny fintech startups. Artificial intelligence could potentially get banks closer to their customers again, but AI requires a specialized expertise, and goes deeper than mere data analysis. How it will go for banks depends on how far Google and Facebook are able to advance with their collaborative approach to AI use in the market.

Potentially, the fourth wave of disruption will be around blockchain. Though it’s widely discussed, blockchain is still in its infancy in terms of widespread acceptance, though in a recent PWC survey, 56 percent of C-suite executives in banking claimed to recognize its importance.

Apart from the obvious disruption of bumping out our long-known currency system and replacing it with a new and personally distributed one, blockchain could once again take away the customer focus/relationship for banks. It could potentially decentralize the entire banking system, possibly doing away with banks altogether.

In the early stages, banks are looking at using blockchain to improve efficiency, cost-effectiveness and security. What we’re currently seeing is a focus on exploring its use for interbank transfers. But the main applications in due course may be more around payments, fraud reduction, know your customer (KYC) and loan processing. Blockchain holds the promise of massive cost reductions through streamlining and automation of processes, not least when smart contracts get layered on top of the blockchain. Cross-border transactions alone could see efficiency savings of $27 billion by 2030, an 11 percent reduction in costs. However, as legacy systems will initially run parallel with blockchain solutions, full savings won’t materialize until blockchain renders these older systems fully obsolete.

At the moment, some banks have begun piloting blockchain, either internally—focused on back-office efficiency gains—or through consortiums with other banks. The latter seems to hold more promise, as blockchain is by its very nature perfectly suited to multi-party solutions. But in order to gain major traction, the technology will need to evolve significantly, as there are limitations with regards to its scalability, transaction speed and common standards.

I see the lack of common standards as the main obstacle to wholesale adoption. Currently, various consortia (R3, Ethereum, and others) are jockeying for leading positions in this new environment, but as they are not interoperable—an issue in banking, which portrays major network effects—it could be some time before we see them in widespread use.

Will blockchain eventually replace banks? This depends on whether its adoption becomes mainstream. The banking industry is heavily regulated, and many banks are waiting to see what regulators will do before they make big moves themselves. In essence, blockchain provides a cryptographically secure way of sending digital assets, without the need for trusted third parties—such as banks. Aside from regulation, what could hold blockchain back is the banking industry’s massive network effects, which are difficult to unravel; and banks themselves may not have the incentive for radical change. As the saying goes, turkeys don’t vote for Thanksgiving.

In sum, banks that are already investing heavily in their digital, AI-driven futures need to keep a keen eye on their customers. While the password may once have been follow the money, it’s now closer to follow your customer.

About the Author:
Martijn Moerbeek is group director of Digital Strategy & Innovation at Legal and General, a forward-looking, UK-based financial services and insurance firm managing over $1.4 trillion in assets. He can be reached at [email protected]