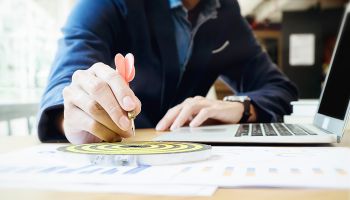 An intensifying pursuit of core deposits is fueling bank mergers and acquisitions in 2018, bankers and analysts say.

"That's for sure been the primary discussion in M&A this year," Joe Gladue, director of research at Merion Capital Group, said in an interview.

Policymakers at the Federal Reserve raised their benchmark interest rate in March—following three hikes in 201—and they signaled more increases are likely this year and next. As rates rise, banks' funding costs move up as depositors push for higher interest payments.

That trend is now underway. The total cost of funds for the banking industry was 0.58% in the 2017 fourth quarter, up from 0.40% a year earlier, according to an analysis by S&P Global Market Intelligence.

This affects the margin between what banks pay for deposits and what they earn on deploying that funding into bread-and-butter loans.

And that is important now, analysts say, because bankers are operating in a strengthening economy with advancing lending opportunities.

As such, acquisitive banks are on the hunt for targets that are flush with core deposits. These deposits are made by customers who have long-standing ties or business relationships with banks that are not based primarily on rates. These customers tend to be less likely to demand higher rates and therefore make up important sources of low-cost funding.

"Without a doubt, banks need more deposits to match their loans," John Adams, vice president of M&A at Sheshunoff & Co., said in an interview. "It will fuel more opportunity for sellers this year." 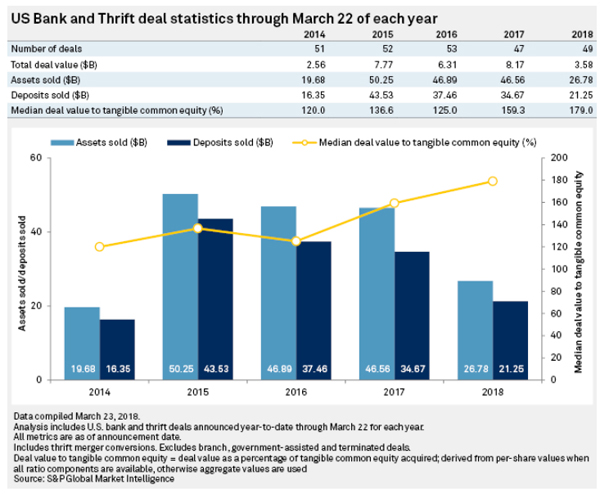 Just this month, Alabama-based National Commerce Corp. announced a $52 million plan to buy Premier Community Bank of FL, with executives touting it as an opportunity to pick up long-term, core deposits via the target's specialty business serving homeowners' associations.

HOA deposits are gathered through members' monthly fee payments and assessments. Premier entered the niche business in mid-2017. By the end of February of this year, it showed a $35 million increase in deposits from year-end 2017.

Also in March, Sandusky, Ohio-based Civista Bancshares Inc. trumpeted its expectation to gain a strong core deposit franchise with a roughly $114 million acquisition of United Community Bancorp. Executives said the deal would bolster Civista's presence in Cincinnati—where it can expand lending capacity — but also give it branches in rural southeastern Indiana, where low-cost deposits abound.

Sheshunoff's Adams said more buyers are mulling opportunities to extend their footprints into rural areas to get the low-cost deposits that often are found at firmly entrenched community banks in these areas. The idea is to amass those rural deposits in order to deploy them in cities where loan demand is high, he said.

An S&P Global analysis found that, through March 22 of each year, bank and thrift M&A volume this year was slightly ahead of 2017—49 deals compared with 47—though deals early this year were typically smaller than last year and previous years.

Adams said 2018 got off to a somewhat mixed start. Many acquisitive banks and their commercial customers spent the first several weeks of the year examining the implications of a federal corporate tax cut that was passed late in 2017. But he said most companies have now made sense of the tax changes and more are sharpening their focus anew on possible M&A.

As 2018 wears on, Adams looks for increasing levels of M&A volume, with more large community banks pursuing acquisitions and lifting average deal sizes. He also noted that deal pricing already has been strong this year, in large part because of the rising value of core deposits that buyers are increasingly interested in acquiring.

The S&P Global analysis found that, of the acquisitions announced through March 22, the median deal value to tangible common equity was 179.0%, well above the level of 2017 or any of the three years prior to that.

"There's no question the emphasis on deposits is affecting the prices that sellers are seeking," Adams said.

Mushir Shaikh contributed to this article.

This article originally appeared on S&P Global Market Intelligence’s website on March 28, 2018, under the title, "In bank M&A, focus sharpens on low-cost deposits"