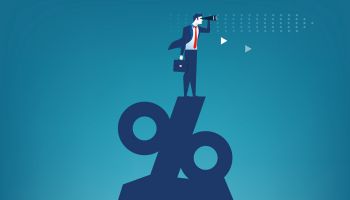 Years of struggling with a low-rate environment encouraged some banks in recent years to grab more yield with longer-term assets, a move that is now raising concerns about interest rate risk.

But identifying which banks, precisely, are at risk is not as easy as it might seem.

Federal Deposit Insurance Corp. Chairman Martin Gruenberg flagged interest rate risk as a potential vulnerability for community banks. In particular, Gruenberg highlighted how community banks, as a group, have 50% of their assets set to reprice after three years or more. If short-term rates spike before a lender's long-term assets can reprice, banking can quickly become a money-losing venture.

"You're suddenly paying more on deposits than you're getting for your loan assets, and that's obviously a big problem," said James Sinegal, an equity analyst for Morningstar.

Among banks with $1 billion to $10 billion in assets, the median portion of assets that reprice in three years or more was 49.3% in the second quarter, according to SNL data.

However, some of those banks think the metric is not the best measure of interest rate risk.

Oritani Financial Corp.'s banking unit has the fourth-highest ratio among $1 billion depositories with 84.2% of its assets repricing in three years or more, but CFO John Fields Jr. said the measure is a poor reflection of the bank's exposure since call reports do not include floating-rate assets with a set cap if current rates are above the cap.

For example, a commercial real estate loan might give the borrower an option to refinance if a benchmark rate was below 4%, but if the benchmark rate is over 4%, the borrower's loan does not change and the call report treats the loan as a fixed-rate asset.

"If you're coming up with a repricing of the loan, you're still repricing the loan," Fields said. By the bank's calculation, just 45.5% of its assets are longer-term.

It is also not clear whether investors and analysts should rely more on call reports or on banks' idiosyncratic, self-reported metrics.

"It's one of the more frustrating things as an analyst," Sinegal said. "Banks don't seem to report interest rate risk comparably."

David Bishop, an analyst with FIG Partners who covers Oritani and Investors Bancorp Inc., said interest rate risk appears to be of shrinking importance in the current market. Investors' banking subsidiary has the highest portion of longer-term assets among depositories with at least $10 billion of assets, at 70.6%. However, Investors' stock has rallied recently despite the interest rate risk and a downward revision to 2018 guidance.

On the flip side, Bishop's broader coverage universe is down roughly 5% from earnings season and 15% off the peak. He said the weaker stock prices are due, in part, to diminished expectations around the rising-rate environment. The 10-year Treasury rate has dropped recently, dampening enthusiasm for higher rates that tend to benefit the banking industry.

"Given what's happened on the long end of the curve and speaking to a lot of management teams, pricing hasn't improved on a spread basis," Bishop said.

Another factor driving the interest rate exposure for banks such as Oritani and Investors is reliance on real estate loans, assets that tend to have longer maturity profiles. Oritani's Fields said the bank attempts to mitigate the risk by limiting loans with seven-year or 10-year maturities, trying to instead "straddle" the five-year maturity mark. By the bank's calculations, 77.5% of its loans reprice or mature in five years or less.

A spokesperson for Investors Bank did not immediately respond to a request for comment, but the bank did offer an assessment of its interest rate risk beyond the call report in an annual regulatory disclosure. As of Dec. 31, 2016, the bank estimated that a gradual increase of 200 basis points in interest rates would decrease its net interest income by 1.65%. The bank did not offer an assessment of how many loans reprice in five years or less.