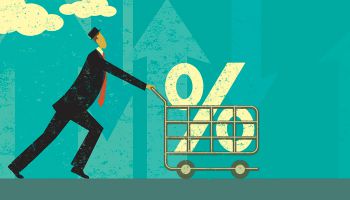 TransUnion study indicates many borrowers would be minimally affected, though small percentage would be hit so they couldn't manage higher payments.

Just what the Federal Reserve’s Federal Open Market Committee will or won’t do at this week’s meeting remains to be seen. But for Americans with variable-rate credit accounts, the average monthly payment increase will come to $6.45 per month if the Fed decides to raise interest rate levels by a quarter of a percentage point.

That comes to roughly the price of a caffè latte venti and a double chocolate chunk brownie at Starbucks. (The pricing comes from FastFoodMenuPricing.com.)

The $6.45 figure comes from research by TransUnion in anticipation of the rate discussion. The international credit information and analysis company determined that of the millions of Americans with some form of consumer credit, 92 million would experience some type of increase in monthly debt service payments. For 82% of the consumers impacted, the monthly increase in credit costs would fall under $10. (These and other figures cited come from the study’s Scenario 2, where personal loans are assumed to bear variable rates.)

Equating the cost increase, as above, to a single morning’s visit to Starbucks is for perspective’s sake, and not humor. Lenders with outstanding credit to consumers at variable interest rates will see their customer bases impacted by what the Fed decides, if there’s an increase. Even if the September meeting sees the committee leaving rates unchanged, at some point, some day, rates will rise again.

“Ahead of a potential rate hike from the Federal Reserve, there is much speculation about the impact to consumers—and their lenders—from increased monthly payments,” says Nidhi Verma, senior director of research and consulting for TransUnion.

Interest rates are at their lowest levels since the mid-1980s. Until last December’s 25 basis point increase, the Fed had not raised rates since June 2006.

[Update 9/21: After the Fed committee met it was announced that rates would  not be raised. The statement said in part: "The Committee judges that the case for an increase in the federal funds rate has strengthened but decided, for the time being, to wait for further evidence of continued progress toward its objectives. The stance of monetary policy remains accommodative, thereby supporting further improvement in labor market conditions and a return to 2 percent inflation."]

There are about 217 million credit-active consumers in the U.S. today, and 137 million hold at least one variable-rate credit product.

TransUnion’s analysis peeled away customer segments that would likely not be hit by an increase in market rates. For example, the vast majority of residential mortgage loans carries fixed rates, and virtually all auto loans do. TransUnion eliminated those and certain other categories of credit from the impacted population.

Then other screens were applied. For example, some customers, while theoretically subject to rising rates, wouldn’t be affected. Consumers who routinely pay off their credit card balances were pulled from the study sample, even if their accounts had variable rates.

In all, 92 million credit-active consumers would see some monthly debt service payment increase. Of those, 9.3 million would lack the capacity to absorb a 25 basis-point increase, according to TransUnion. An increase of 100 basis points would increase the portion of consumers who would have difficulty meeting their increased obligations to 11.8 million consumers.

Whatever and whenever the Fed acts, Verma says TransUnion recommends that lenders segment their own portfolios to assess the degree of risk in their portfolios.

View a video about the study