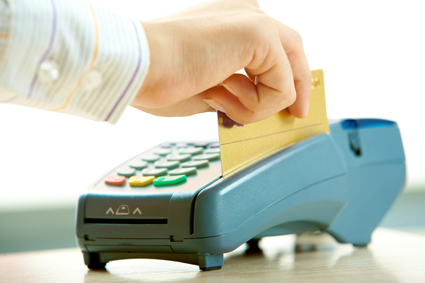 Point of sale card- and check-based transactions hit an eight-month high in October, a barometer that holds some promise for the holiday shopping season that retailers of all sizes have come to depend on to make their year.
Transaction volume grew 7.5% in October over the previous year’s October, and dollar volume growth rose year-over-year by 9.4%, according to the latest SpendTrend report from First Data Corp. The October percentage increase for dollar volume was considered a steady follow on to September’s 9.5% year-over-year increase. The October growth in transaction volume was the highest growth rate seen since February 2011.

Credit cards were the preferred payment choice for the fifth time in six months, First Data reported. And PIN-based debit usage exceeded signature-based debit in both dollar and transaction volume.

Usage at food and beverage stores was a standout area: Dollar volume rose by 9.3% in October, a 13-month high. While some of this was due to food-price inflation, First Data noted, transaction volume growth also hit a 13-month high, at a 6.9% growth rate.

Unlike some other retail sales measurements, the report, published Nov. 9, is based on actual same-store consumer transactions at the point of sale using the company’s proprietary systems. Transactions counted include those made with credit cards, signature debit, PIN debit,  electronic benefit transfer cards, and checks. (The study does not track cash transactions.)

What import does this have for the holiday shopping season? First Data analysts believe that customers are coming off several years of deleveraging. Now they have been demonstrating a willingness to spend again. “Consumers may be enticed into additional credit card spending by merchants engaging in promotional activity,” First Data suggested.

Other findings of note:

• Dollar-volume for October in the Building Material/Garden Equipment/Supply Dealers category hit a year-over-year growth rate of 8.5%, versus the growth rate seen in September of 6.6%. First Data analysts believe this may reflect damage and other impacts from the early winter-like storms that hit some parts of the country in October.


To listen to a First Data SpendTrend podcast, click here