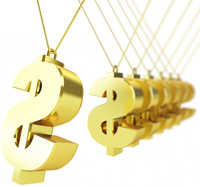 One of the basic building blocks of physics is that for every action there is an equal and opposite reaction.
By Keith Reagan, Darling Consulting Group

Scientists know this as the third of Newton’s Three Laws of Motion; it has been mathematically proven and is universally accepted as fact.

Does it translate into the banking world?

Before we answer that, let’s outline the actions that are currently putting pressure on the banking world; the reactions that appear to be happening; and the results (intended and unintended) that are occurring.
Actions
Where to begin?
• Sustained high unemployment levels for the foreseeable future.

• Compressed real estate values that do not appear to have reached a bottom.

• QE1, QE2, Operation Twist, and European uncertainty, all creating an extremely flat yield curve with too much cash in the system.

• Increased cashflow from investment portfolios that were designed to mature in 2012, because that is when rates were supposed to be rising.

Results of all of the above = lower margin!
Reactions
The initial reaction to a low-rate environment is from your borrower, resulting in increased refinance activity. Indeed, bankers have seen multiple waves of refinancing. Although there is generally too long a lag, the next reaction is banks reducing deposit rates. These reactions and counter reactions have been happening since late 2007.

Your best loan customers are reacting again by letting you know they currently have a better offer on the table.
Banks’ reactions cause issues
Without the same ability to lower deposit rates, with a loan pipeline that is insufficient to maintain the current portfolio size, and an over-bought securities market offering little return without taking credit or undue interest rate risk. How are banks reacting?

Unfortunately some reactions have been to throw away loan pricing methodology, which may equal additional credit risk. We appear to be back to the loan pricing of 2005-2006 where the creditworthiness of the borrower was not focused on as much as the rate that caused the deal to close.

Whether you use a complex loan pricing model that accounts for an entire banking relationship, or you use a simpler index plus a spread-based pricing philosophy, have you written deals recently that don’t meet your established criteria?

The answer is likely yes, with the reason being because that is what it took to get the deal done.

All banks face the challenge of putting cash to work today to maintain a portfolio. But at what point are you not being paid fairly?

It will be different for every deal, because not every deal deserves the best rate in town.

Not every deal deserves the best rate in town.

Why did I repeat that statement? Because that is the point!
Balancing rates and loan quality
Targeted campaigns with aggressive low rates for the best credits available in a market can be an effective strategy. However, the spread between different credits should be extremely wide today to reflect the fact that no two loans are the same, and that not everyone deserves the same rate.

Conversely, banks saying that no one deserves the rates that are being done could be losing their best credits and therefore lowering the overall credit quality of their portfolios. Too many banks are not growing their loans today because they perceive that rates are too low.

We all wish loan rates had 5% and 6% handles instead of 3% and 4%. Unfortunately that is not where rates are.

It is time for banks to stop saying, “No one deserves a rate that low.”

It’s true. Not everyone deserves the lowest rate. But there are deals (i.e. the best credits) that do.

And aren’t the best credits really what you want?

Conversely, if you are still writing loans at 6%, what does that say about the kind of credits are you putting on the books?

It is already hard enough to make loans today without drawing an arbitrary line in the sand for rates. If you draw a line in the sand on rate that is not credit based, you are most likely missing those opportunities that you really want (the best credits).
Results
In addition to margin compression, banks may be adding undue credit risk, which will ultimately lead to further earnings pressure. The majority of net interest income simulation models that I have seen over the last two quarters are showing declining NII going forward. (Collectively at DCG we have run more than 600 bank simulations during that timeframe).

Unless you are assuming balance sheet growth in your simulations (which you should not be for baseline analyses), you are likely seeing the same thing.

So how should you react?
Eight reactions to consider
Some reactions are better than others. With no offense to Sir Isaac Newton, when it comes to formulating banking strategy, I prefer proactive action to reaction.

1. Continue to lower deposit rates.
If you are paying more than 1 bp on NOW accounts, 5 bps on savings and 25 bps on high-tier MMDAs, what are you waiting for?
2. Consider the risk/return of adding longer-term loans to your portfolio.
Offer 7-10 year loans if 5-year loan rates are too competitive. For the right credits, you may be able to enhance margin and improve credit spreads.

Interest rate risk is preferable to increased credit risk.
3. Conversely, consider being even more aggressive than your competitors, but shortening the loan.
Do not accept too low a rate and interest rate risk. (Implementing a back-to-back swap program would accomplish a similar goal and increase non-interest income).
4. If you are not already doing so, quote a spread over an index, not a rate, to your loan applicants.
This will help mitigate some of the volatility risk associated with the current interest rate markets.
5. Consider making investment-like loans (i.e. the best credits) and aggressively target those loan customers instead of buying bonds today.

Programs that have worked in different parts of the country include:

• Aggressive ARMs (Yes, some borrowers still like ARMs)
6. Ensure the entire relationship is acquired with all loan programs.

Deposit relationships may not be “worth” what they used to be, but they will be again.
7. Make sure options included in a deal are priced appropriately.

Remember that rate locks, caps, floors, etc., all have value.
8. Include prepayment penalties.

Even at these rate levels, do so. Protect yourself. Rates could go lower.
Parting words, with a nod to Sir Isaac
The proactive actions above are just a sampling of some strategies that are working to help banks maintain margin without taking on too much risk.

If discussion about these kinds of strategies is not occurring at your ALCO meetings, what do you think the equal and opposite reaction will be?

About the author
Keith Reagan is a managing director at Darling Consulting Group. He has nearly 20 years of experience working directly with community banks, helping them improve their overall performance through proactive management of liquidity, interest rate risk, and capital. He works to develop strategies that best fit the risk/return dynamics of their balance sheets. Keith has served on the faculty of ABA's Stonier School of Banking, has written many articles for a variety of professional publications, and is the editor of DCG's monthly periodical, the DCG Bulletin.