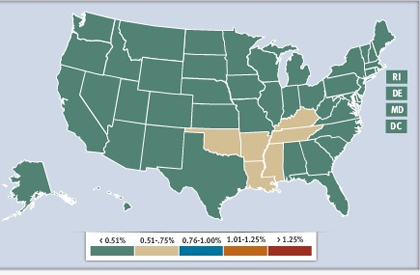 Auto loan delinquency rates hit new lows for the second quarter in a row in the April-June period, reports TransUnion.

Reasons behind the numbers
Multiple reasons lay behind the improved delinquency numbers, according to TransUnion analyses and an Banking Exchange interview with Peter Turek, automotive vice-president in the company's financial services business unit.

"It's not surprising that auto loan delinquencies remain at record low levels," says Turek. He pointed out that recent TransUnion research has indicated that consumers today put more value on their auto loans than they do on their credit cards and mortgages.

"This is partly due to the need for transportation to get to work or to seek employment in a difficult job market," says Turek. However, he also pointed out that a strong used car market has given borrowers more equity in their vehicles than has traditionally been the case.

"They feel that they have some skin in the game now," Turek explains.

Overall, says Turek, "Consumers want to keep their auto loan relationships in good standing." The trend is a boon for lenders, he said, as funding rates are extremely low and auto lending is good business for creditors. More conservative underwriting combines with the factors already mentioned for a good outlook for lenders, Turek adds.

"It's a very attractive segment right now to lend in," with average maturities of 39 months, Turek points out.

And a potential bonus for all concerned will be that when some buyers come to trade in their vehicles for newer models, "they won't be rolling negative equity into new loans," says Turek.

Rise of nonprime borrowing
Overall, Turek says the company's research indicates that both auto dealers and lenders have grown much more responsible, in the aftermath of the credit crisis, in credit policies and practices.

Does this, then, mean that there is cause for concern in the growth of nonprime borrowing for autos?

This is not to say that the nonprime lending increase will not have any effect.

"With the increase in nonprime borrowing, we do anticipate that auto loan delinquencies will begin to increase," Turek says. "We are at such a low auto loan delinquency level--far from normal standards--that a slight rise through the end of the year should be expected, though the overall rate will likely remain relatively low."

And then there is the potential impact on used-car prices of the new models for 2013. Introduction of the new season's offerings typically softens used card prices somewhat, Turek acknowledges, and there are an anticipated 25 new choices expected to come out.