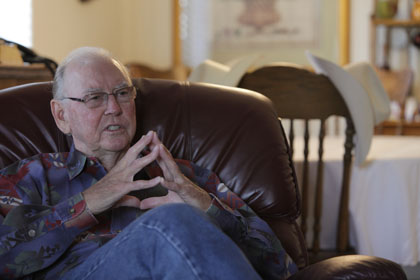 Taking a moment at ease at home, Joe Moss tells the story of how his business began with a call from his father to come back home from Memphis and join him in an unusual venture. Photo by Lance Murphey

Almost as interesting as the main characters you meet in my line of work are the supporting characters. These are the people who befriend, assist, do business with, or otherwise bolster the bankers who are usually the main subjects of my articles.
I recall a retired U.S. Air Force general living in a cabin in the back woods who, like the banker who introduced us, has since passed away. He was living in obscurity in eastern Kentucky. We drank wine at 11 in the morning, but, boy could that man tell a story or two. The banker had a sidekick who had been a Navy pilot, and I recall some good-natured inter-service rivalry that morning.

I also remember the smell of Thanksgiving Dinner being cooked in the galley, deep in the belly of a commercial fishing vessel whose owner banked with Viking Bank, in Seattle. CEO Pat Redmond, who recently died, knew his way around the ship, and meeting the captain and his young son, who would be joining their family aboard on the holiday, was a treat. To this day I don’t know if the stories the boy told were true or just tales manufactured to impress a landlubber. I just enjoyed the experience.

On my recent trip to meet McCall Wilson, president and CEO of The Bank of Fayette County, Moscow, Tenn., he introduced me to Joe Moss. He only told me, as we drove along a country road to Moss’ simple home, that Moss was an older man who helped him with an early kick in the butt when he first took the reins at The Bank of Fayette County in 2002, and was now an investor in the bank. (Wilson, 2010-2011 chairman of ABA’s America’s Community Bankers Council, was profiled in our February 2011 cover story.)

“Mr. Joe keeps me straight,” said Wilson. “He gives good advice and keeps me on the right path.” We spent some time with Mr. Joe, saw his small collection of restored classic cars, and met his right-hand man, Rufus, who has been with him for years. We wound up in his parlor, and heard more about his relationship with Wilson, and then we heard his own story. It’s a charming way they have in the South of calling older men and women by the Mr. or Mrs. Or Miss and their first name, conveying respect yet friendship at the same time

What understatement, about advice! The first time the two crossed paths, Moss gave Wilson a thorough chewing out for not returning his phone call promptly. To Moss, a businessman delivers, in every way. He wasn’t shy about correcting Wilson.

And when you know more about the story of  Mr. Joe, you’ll understand where that comes from. Retired now, Moss established a work ethic that could set an example for every generation.

As a young man, Moss had gone into Memphis to work at the General Motors plant. As time went on, a major roadway was built through Fayette County, the first county east of Memphis, and there was a business in buying up the condemned homes. Homebreakers took them to pieces—even years ago, you could be “green” before it was in fashion—and sold the bits. Moss’ father had some land, and set up stockpiles of the pickings. There was a yard for stairways, a yard for lumber salvaged from the former homes, another for windows, and so forth. Builders and others could buy them for reuse.

The elder Moss, in failing health, persuaded his son to come out to Fayette, to help him and to be his partner. He asked his son what he could afford to buy into the business. The younger man didn’t have all that much on hand, but his father took what he could muster and gave him half the operation. Moss joined his father in 1968 and a year later the older Moss died.

As the salvage business petered out, Moss cast about for another line, and decided to take a chance in the lumber business. He knew busy builders needed supplies brought in, and knew of a big lumber wholesaler in Corinth, Miss., that he thought he might be able to persuade to sell him wood for resale to the builders.

Well, he took his big truck down to Mississippi, and on his way drove into a state truck weighing station. Moss admits he had no clear idea at the time what this was all about, just knew that trucks were supposed to report there.

A state employee came out of the facility’s booth, shaking his head.

Moss says his worries began when the worker began writing things down on a big yellow pad. He circled the Moss family’s battered truck, stopping to record things. What, Moss couldn’t imagine.

Finally, he approached the cab of the truck.

In short, he told Moss that the vehicle had so many safety violations going on, he was not only going to write him up big-time, but he was going to impound the vehicle. He ordered Moss to park his rig back by one of the weight station’s outbuildings.

The young man was at a stand. Home was a ways back, and he’d had his mind set on having a shot at that lumber. He decided honesty was the best policy, no double talk.

The state man must have had a tender heart. When he heard the story, he said Moss could go try to buy a load, but that he’d still have to come back and park his truck pending further inquiry.

Moss walked into the big wholesaler’s yard office cold, and stated his business. The supervisor on duty allowed that the deal might be struck, and asked to see his money. Moss had about enough cash for the load, a truck-full of two by sixes.

As the truck was loaded, Moss told the yard supervisor about his experience at the weigh station. The man laughed, and said, “Leave that to me.” He picked up his phone and dialed the station. He told the state man about Moss buying his lumber. After his chat, he told Moss he’d persuaded the official to let him go back to Tennessee. The understanding was he wouldn’t return to Mississippi until all of his truck’s problems were fixed. Moss solemnly agreed.

That truckload of southern yellow pine was the beginning of the Moss lumber business. He called a mechanic he knew and allowed that he had all this work that needed doing, but no cash on hand. He’d spent it on the wood. The mechanic said he’d take care of what needed fixing, and that they’d work it all out.

Now, Moss had to sell the lumber to reap some profit.

“I didn’t know a soul,” he admits now. He began calling on builders, and this was his standard line: “I’m Joe Moss, I’m bringing good lumber in, and I’d like you for a customer. I’ll get you what you need, and get it to you on time.”

Someone gave him a chance, he got the load there on time for the carpenters to use it, and business began to come his way. The yards that formerly held reclaimed parts of houses now held fresh lumber waiting to be turned into homes.

Business got busier and busier and he and his hired man, Rufus, got things down to a system. He’d drive out a load to get the builders started, and drive halfway back to the yard. Rufus would be waiting there with a loaded truck, and drive the empty back to the yard and reload it. They made this work for quite some time.

Bank balances, and the business, grew. “I didn’t have time to spend anything,” jokes Moss. “I was working all the time.” He added more yards, and the business continued to grow. His wife, Jo Ann, who worked for Wilson’s bank long before his arrival, shifted over to the busy family business.

Finally, the day came for Moss to retire, and he sold the business, for millions, plus a golf course in Nacogdoches, Texas.

Among the things he did with the money was to give Rufus a house and continued employment as a sort of jack-of-all-trades on his property. 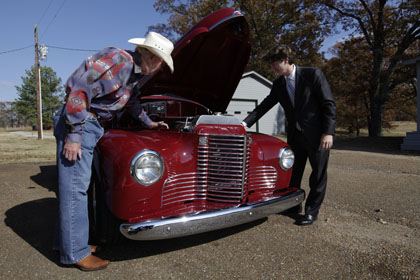 Joe Moss, retired lumberman and bank stockholder, shows off his restored 1949 International pickup truck to banker McCall Wilson. Moss is one of a number of local leaders that Wilson looks to for advice as he builds The Bank of Fayette County’s business. Photo by Lance Murphey 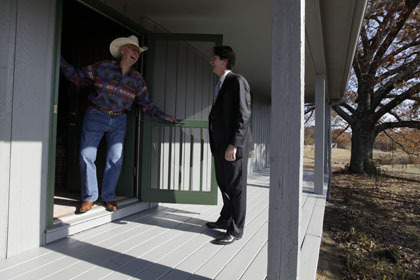 Joe Moss welcomes McCall Wilson to his home. Though he built a very successful business through sweat and effort, Moss lives simply and without pretense in rural Tennessee. Photo by Lance Murphey

More in this category: « Take a fresh look at mystery shopping Ear to the ground finds a mixed story among community bankers »
back to top