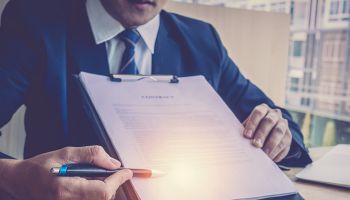 Your bank shouldn't first learn of deferred comp problems in the midst of negotiations.

We have had a couple recent issues arise in our community bank acquisition practice that need to be addressed, or at least reviewed, by all community banks, particularly those who use any kind of deferred compensation for their directors or officers.

Deferred compensation agreements allow directors to defer their board compensation that is currently payable, to some subsequent point in time at which they are entitled to receive it. Many of these agreements were created years ago. The time to address the issues is before you get into a deal process.

Complying with IRS 409A

The significant intervening factor with respect to all deferred compensation agreements is the implementation of Section 409A of the Internal Revenue Code, passed by Congress over a decade ago.

IRS Code Section 409A is complicated, to say the least. The bottom line, however, is that if the deferred compensation plan fails to comply with Section 409A, the deferrals are included in income when vested and are subject to a 20% penalty tax paid by the participants in the plan. In some cases, an underpayment interest penalty may also apply.

Because of these draconian issues, my recommendation is all deferred compensation agreements, particularly those for directors that may have been implemented some time ago, be reviewed for Section 409A issues.

What to consider relating to a deal

Unfortunately, there is no specific format for an agreement with respect to a plan that is subject to Section 409A except that it be documented. There are, however, certain minimum provisions that should be included.

Some of these provisions, some of which are optional, include the following:

1. Definitions with respect to distribution events, such as separation from service, disability, change in control, unforeseeable emergency, and leave of absence.

3. An optional provision for cash-outs of small distributions.

5. Optional provisions stating other desired exceptions to the prohibition against benefit accelerations, such as distribution of benefits (i) pursuant to a domestic relations order incident to a divorce or legal separation; (ii) to pay FICA taxes due on compensation deferred under the plan and any associated income taxes; or (iii) to pay taxes due on breach of Section 409A.

6. A provision for voluntary plan termination by the employer.

7. A provision for interpretation of all terms and provisions consistent with Section 409A, especially regarding all undefined, ambiguous, or incomplete definitions and provisions.

8. A provision under which the employer either disclaims or accepts responsibility for any adverse tax consequences arising under Section 409A.

9. A spendthrift or non-assignability provision.

10. A provision that the plan benefit is an unsecured and unfunded contractual promise to pay plan, rather than a funded plan.

11. Provisions designed to comply with state law employment requirements and choice of law.

12. An optional provision allowing for subsequent elections changing the previously designated form from time of payment, including a provision for treating a prior election in installments as a unitary single election or a series of individual elections for this purpose.

14. A provision stating the date by which elections to defer base pay, bonuses and performance-based pay must be specified, both for existing participants and those who become eligible after the beginning of a year.

16. A provision for application of all terms and provisions consistent with 409A, especially as to all undefined, ambiguous, or incomplete definitions and provisions, is not required—but it is permissible and useful.

As you will note from the above “laundry list,” 409A is a complex area. Unfortunately, in some of the recent community bank acquisitions we have participated in, 409A violation issues or failure to comply issues had become paramount, primarily because of their impact on the human beings involved.

Just a word of warning to the wise: Review your deferred compensation agreements, both for directors and executives, to make sure they are 409A compliant. It will save you a lot of trouble in the long run. It is much easier to get these issues addressed on the front end than it is on the back end when you are in the throes of trying to get a deal put together.

More in this category: « Succeeding with succession Setting things straight on Sub S status »
back to top