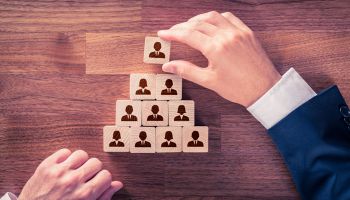 Is your bank ready to decide who will become top of your bank's pyramid?

A word to the wise: If you want to keep your bank an independent community bank, then deal with succession for your Chief Executive Officer. Deal with it upfront and continually.

In today’s consolidating environment, one of the key issues driving consolidation is the failure to provide for adequate succession for the CEO.

This is not something that simply “falls into place.”

The board and the CEO have to plan for succession, generally over a period of years. The failure to plan will result, in all likelihood, in the sale of the bank. As one 67-year-old CEO of a highly rated, high-performing community bank recently told me, if she fails to find succession for her position over the next six months, then the bank will be sold within the next year.

These are real issues.

Of course when dealing with succession for the CEO, you have to do so under two scenarios.

• First is short-term, i.e., immediate, needs to be addressed.

As in, “What happens if the CEO cannot come into work the next day for a prolonged period of time?”

• Next, the long-term scenario needs to be addressed, i.e., retirement.

As in, “When the CEO finally decides to leave, who will take his/her place?”

In addition, the issue of CEO “ownership” (along with CEO succession) needs to be addressed. There are not many CEOs who will want to continue to retain ownership of any significant block of stock once they are no longer CEO, unless they become an active Executive Chairman.

How, then, do you start on the road to succession?

At the very least, the CEO needs to provide the board with adequate notice of his or her retirement plans. I generally define “adequate” as being at least 24 months before he or she plans to step aside or move up to the Chairman’s role.

The next—and tougher—question is often “Who replaces the CEO?”

For banks that have done a good job grooming a successor internally, then the transition will likely be much smoother. Looking outside for a successor has pros and cons, but you will almost certainly need adequate notice, as noted above.

For those of you who have an internal candidate for a CEO successor, keep in mind that in virtually every circumstance the promotion of a senior community bank officer into a vacant CEO position causes two things:

1. A hole in the spot from which the new CEO has been promoted.

2. The risk that those who may have also been up for the position but did not get the promotion will leave, because they realize they will never be able to run it.

Both risks must be addressed by the board and the existing CEO in connection not only with the selection process, but with the implementation of the CEO successor selection.

Although every board wants a CEO exactly like the one it has, that is simply not possible without going into some illegal cloning activities.

So what should you look for in a new CEO, whether it is internal or external? Here are five big issues:

1. Does the CEO candidate have similar experience running a similar-sized or larger community bank? (Or have they been nearly running one, such as Chief Operating Officer or something similar?)

The CEO position is not one that should be a training ground for incoming personnel, regardless of whether they come from inside or outside.

The CEO is the individual who is going to run the bank for the foreseeable future. Because of that, whoever comes in to take over the existing CEO slot needs to have something similar to CEO experience, either at another bank or in your own community bank.

2. Is the CEO capable of having good board relations?

And does he or she have a compatible personality?

In that case, the CEO is going to have to liaison with the chairman and the rest of the board and maintain good board relations.

A combative CEO—of which I have seen many—does nothing but attempt to intimidate the board to get his or her own way. If you are selecting from the beginning, you need to find a CEO who will continue to maintain excellent board relations.

3. The CEO also needs to provide leadership for the organization.

Often a chief lender or chief financial officer who may have been number two or three in the bank will be promoted into the CEO position, even though they have failed to exhibit appropriate leadership in their current position.

Leadership can be taught—to a certain extent.

That said, leadership appears to be an inherent trait that causes people in the bank to willingly follow the direction of the CEO, as opposed to being intimidated into following him or her. Consider the leadership trait when you are looking for the next CEO.

You may have in your bank someone who is that. If you bring in an outside third party as CEO, however, part of the job description needs to be to get plugged into the community.

You also need to realize that this may take a period of years.

Business development is always an obligation of the CEO, as is being the face of the community bank in the community.

Make sure that potential is there before you commit.

5. Should the CEO also be chairman?

Much ink has been spent on whether the CEO and the chairman should be the same person.

For the majority of community banks in the country, at least based on my anecdotal experience, the CEO and the chairman are the same person, today.

That often changes, however, when the existing CEO retires into an Executive Chairman position. There is nothing wrong with that except you need to make sure the incoming CEO has sufficient latitude and authority to serve as CEO, notwithstanding the fact the former CEO is still on the board and involved in the bank.

In the perfect world where none of us live, we would have in our banks both written long-term and short-term management succession plans. This would include identification of successors and process, as well as what is required to get the individuals into the next position. It would also involve regular evaluation and adjustments, as well as monitoring on an ongoing basis.

In any event, CEO succession is critical to remaining an independent community bank. Make sure the board and the existing CEO approaches it seriously and methodically.

More in this category: « 14 signs of a high-performing bank Avoid this M&A roadblock now »
back to top