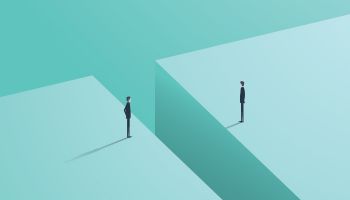 From the “Examiner from Hell” to “The director time forgot,” attorney-consultant Jeff Gerrish knows community bankers’ challenges, and provides practical advice and awareness.

I had the opportunity for a day and a half recently to participate with two of my partners in a community bank merger and acquisition workshop. This workshop was not a bunch of talking heads or investment bankers attempting to sell their services to the attendees. It was just me and my two partners, Philip Smith and Greyson Tuck, sharing practical, real-life experience as to how to approach a community bank merger transaction as either a buyer or seller.

An interesting thing about this particular workshop is that it was sponsored by one of the national trade associations and was “sold out.” There is still clearly a significant amount of interest among community bankers in how to appropriately manage or take advantage of opportunities in a truly consolidating environment.

Speaking of the environment…

My personal recollection, having started employment with the FDIC in 1973, is that there were roughly 14,000 charters at that time. We are clearly in a period of consolidation.

We also shared with the group information on the reduction in the number of banks on a state-by-state basis since 2007. Not to give you all the details, but the state of Florida, for example, has lost 53% of its banks since 2007. Georgia is down 47%, Illinois 29%, California 42%, Washington 48%, and the list goes on.

Again, we are clearly in a consolidating environment. Over the years, some of that consolidation has been caused by changes in the law. Unit banking states suddenly allowed branching, and then there came the advent of interstate banking and then later interstate branching.

Some of that consolidation is also a result of bank failures or troubled banks being taken out of the system through acquisition or otherwise. So we effectively “convinced” the group that we are in a consolidating environment.

Can’t play without a plan

From a strategic standpoint, we recommended that if these community bankers are going to be involved in the acquisition game on either the buy or sell side, they needed to plan for it.

• If you are going to be a buyer and you have limited capital, then you really need to plan for and find that optimum seller.

• If you are going to be a seller in the next 6 to 24 months, then you need to plan to get the bank in its best posture with the strongest course of sustainable earnings stream to be attractive to a buyer.

In this particular group, there were probably more buyers than there were sellers. Obviously, for every buyer there needs to be a seller, but it seemed like the buyers outnumbered the sellers by quite a bit this time—or the sellers were not opening up about whether they were truly sellers in the short-term.

What people want to know

We then shared various acquisition secrets with the group, including what to expect for financial advisory fees, legal fees, and those types of things. We also covered key pricing matters, such as how to determine whether you are getting a good currency from a buyer using stock; how you price a community bank acquisition; and what you should expect your professionals to do or not do for you during a transaction.

The interesting thing in this type of meeting is that you have some chairmen of the board, some outside directors, multiple CEOs, and lots of CFOs present. Typically each kind of attendee desires a different level of depth in connection with the discussion.

For instance, the outside directors and chairmen want to understand the issues—but they do not want to get into the weeds. The CEO is probably looking a little more in the weeds. The CFO is disappointed if we do not run through our financial models—they want the whole lawn.

Some of the interesting questions that we did address included whether there is any such thing as a merger of equals.

Somebody has to be “more equal.” If you are a $250 million bank combining with a $325 million bank, for example, can you as the smaller bank be in control (i.e., the dominant alpha dog post-transaction)? The answer, yes, it is possible—depending on what you negotiate; who is running the place post-transaction; who has the most board seats; who holds the chairman and CEO positions; where the “world headquarters” is located; and the like.

Someone will be more “equal” though.

We also received a lot of technical questions, since we covered in depth some of the technical pieces, such as:

• How do you make sure you as a seller receive stock that is tax-deferred? (Nothing is tax-free.)

• What about accounting for acquisitions? What happens to the target’s loan loss reserve? (By the way, it goes away under the current accounting treatment for business combinations, where everything is marked-to-market as of the date of close.)

In any event, it was a good exchange of ideas with community bankers on community bank mergers and acquisitions. There is still a heightened interest, if this particular workshop was any indication.

Although I personally am a staunch supporter of independent community banks and believe there is a good, long-term future for them, I am also a realist. I understand that at some point the banks are going to sell either because they have to (troubled banks) or for the typical historical reasons (i.e., no management succession, no board succession, no share liquidity, no cash flow, the need to reinvest, etc.).

As a result, we have assisted community banks as both legal and financial advisors over the years in hundreds of community bank merger and acquisition transactions on both sides of the table. Although I would like to see community banks remain independent, I know they are going to combine, so we try and get in the mix to make sure they do it right.

As a side note, one other thing I would like to see is more new banks. Historically, periods of consolidation have been followed by periods of new bank charters. We are not seeing that yet. There are a lot of reasons for that, which (surprise) will probably be the subject of another blog.