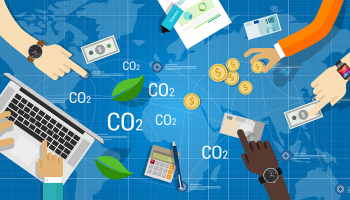 A total of 18 billion tons of carbon allowances were traded in 2021, equivalent to an estimated $1 trillion in notional value, according to Intercontinental Exchange (ICE), a global provider of data, technology, and market infrastructure.

In addition, a record 19 million environmental futures and options contracts were traded on ICE, last year.

Gordon Bennett, managing director of Utility Markets at ICE, said: “For over a decade, ICE has provided the markets with the ability to price the negative externality of emissions through carbon allowance futures, and the positive externality of creating carbon-free electricity through renewable energy certificate (REC) futures.

“This year we will be expanding our carbon credit markets to value and support the preservation of natural assets, as well as launching our first carbon index futures contract to provide access to the global cost of emissions in one instrument.”

In October last year, ICE invested in LevelTen Energy, a transaction infrastructure provider in the renewable energy economy will help to bring greater transparency and liquidity to the renewable energy industry and will enable participants to transact on power purchase agreements and physical energy assets more efficiently.

In addition, the exchange plans to expand its renewable energy futures markets with the launch of six US REC futures on January 18, based on solar and wind energy.

In 2021, approximately 705,000 REC futures were traded on ICE, equivalent to an estimated 48-million-megawatt hours of renewable energy.

Bennett says there is significant demand for corporate buyers who want to green their power consumption through renewable power purchase agreements and renewable energy certificates.

“REC futures markets will become increasingly important to the process of efficiently allocating capital to renewable electricity projects and managing the risks of transitioning to a cleaner electricity grid,” added Bennett.