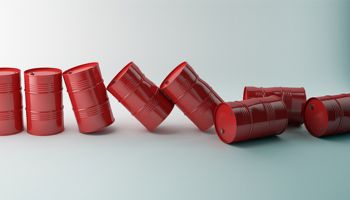 The recent fall in the price of oil is having an impact on deal pricing in Texas and could bring a new group of buyers into the market.

One man’s pause is another’s opportunity

"Any time you have a 20% to 30% price correction in the middle of a deal, that's going to have an impact, and buyer and seller are going to have to negotiate and structure around that," Lee said. "Or they can push the pause button and come back in a few months when things are stabilized."

Lee said the stock of many Texas banks feels oversold at the moment, and he believes a rebound to some degree will be coming.

But in the meantime, the situation is creating opportunities for some large private buyers that have been squeezed out of the market while the public companies had strong currency. Practically every attractive, sizable deal that came along in recent years went to a public buyer, Lee said. "Well, now that's no longer the case as a lot of those buyers that were heavily in the market are taking a step back," he said at Bank Director's recent “Acquire or Be Acquired” conference.

McKinney, Texas-based Independent Bank Group Inc. Chairman and CEO David Brooks told SNL at the conference that the drop in oil prices has been the first bit of adverse noise in Texas during the last few years and could be a wakeup call for some sellers. He said there has been a mentality among sellers in the state that there was little reason to sell quickly as multiples kept rising.

"But now all of a sudden I think there's going to be a little bit more price discovery going on," Brooks said.

The rapid fall of the price of oil from about $110 a barrel to $45 has caused some buyers and sellers to take a pause and wait for things to settle down, Brooks said. The number of deals at least in the first half of 2015 could be subdued as a result.

Brooks said that as Texas bank stocks have slid in recent months, including those of active acquirers, the economics behind deals and what companies like Independent can pay for banks changes.

Lee agreed, saying that pricing levels overall for Texas deals should come down this year with the uncertainty surrounding the state economy playing a big role. "It doesn't mean that we go back to book-and-a-half, but it may mean that sellers need to adjust their expectations," Lee said.

Brooks said some banks are sitting on loan portfolios that are heavy on floating-rate loans. Those companies may be waiting for a hike in short-term rates to improve their earnings and could end up on the market if rates do not move higher, as some expect in 2015.

Is the media the main worrier? Or is threat real?

Curtis Carpenter, managing director of investment banking at Sheshunoff & Co., said offers have been withdrawn on some M&A deals in Texas. He said the next 90 to 120 days will go a long way toward telling the tale of how big the impact of falling oil prices will be on M&A. But he said that bankers in the region that he has spoken with are much less concerned about the issue than the national press seems to be. [Read Ed O’Leary’s oilfield blog, “An oil lender’s take on the price drop.”]

Commerce Street's Lee, though, said the issue is real and that any time there is such a large price depreciation in a critical asset it has to be taken seriously. Some of what has happened in the capital market may be an overreaction though, he said.

The Texas economy is less exposed to the energy sector now than it was in the 1980s when there was oil price volatility, Lee said. "But without question Texas is an energy-focused state and it has significant exposure to energy," he said.

The event is likely to be a contained credit issue as many of the CEOs at the helm of the involved community banks were around during the crisis in the 1980s. "So they saw a lot of the mistakes," he said. Bankers have indicated to Lee that a sustained 18-24-month period of oil prices in the $40s would cause a "significant issue." However, if prices rise into the $50-$70 range, banks could restructure credits to get through, he said. Any credit issues that do emerge will likely do so in the third and fourth quarter of 2015, he said. Oil field service credits seem most likely to be impacted, according to Lee.

Brooks said that, for Independent, a target would need to be at least $400 million in assets to move the needle. The bank is also interested in obtaining core deposits, preferably in one of the large Texas metro markets. Also critical is finding a bank that has been able to make money during this current cycle, he said.