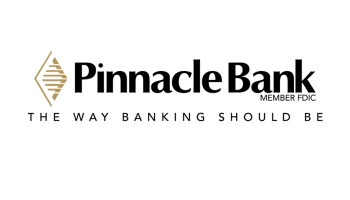 Virginia-based Pinnacle Bank’s planned merger with Virginia Bank is back on track after the two companies agreed amendments to the merger agreement.

The banks announced this week that they had agreed on modifications to financial projections and the terms of the merger as a result of the impact of the COVID-19 pandemic.

In April, the banks announced a delay to the planned transaction citing “near term operational challenges” stemming from the pandemic.

Virginia Bank shareholders will be offered $16 or 0.54 Pinnacle shares in exchange for each share they own, according to the joint statement. Previously, the offer was $16 or 0.5 Pinnacle shares.

The amendments value the transaction at approximately $23.5 million – about $8.6 million less than when it was first announced in January.

In addition, Pinnacle said it intended to issue $7 million worth of subordinated debt to help fund the merger.

Aubrey Hall III, president and CEO of Pinnacle, said: “Although the economic environment is much different due to the impact of the COVID-19 pandemic, the strategic merits of this transaction have not changed.

“In fact, we believe there is a stronger case than ever for a combined company that will be better equipped to weather the current headwinds and be positioned to take advantage of the eventual recovery.

“With some enhancements to deal terms resulting from adjustments to our respective financial projections, I believe we have developed a solid plan that will allow our two institutions to move the merger process and our partnership forward.”

Virginia Bank CEO Donald Merricks added that the “unprecedented” challenges of the pandemic had not changed the banks’ shared confidence in the deal.

The transaction is now expected to be completed at the end of the third quarter or early in the fourth quarter of 2020, subject to shareholder and regulatory approvals.

Separately, Arizona Bank & Trust is to acquire the Arizona operations of Johnson Bank.

Johnson Bank, owned by Wisconsin-headquartered Johnson Financial Group, has four banking centers in Pheonix and Scottsdale, Arizona, with total deposits of approximately $362 million and loans of $186 million as of March 31, 2020.

Arizona Bank & Trust had $866 million in total assets and $754 million in deposits as of March 31, 2020, according to a statement issued by its parent company, Heartland Financial.

Following the completion of this deal and of Heartland’s planned acquisition of Texas-based AIM Bancshares, announced in February, Heartland said it would have total assets of more than $15 billion, with 144 full-service banking locations operating in 12 states.