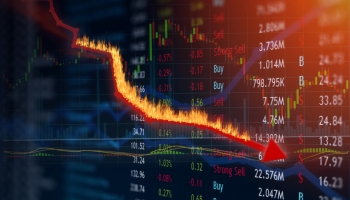 While the stock market dropped an unprecedented amount over the last several business days, bank stocks dropped along with it.

The largest banks were particularly effected due to the exposure to Asia and Europe, where the coronavirus had already impacted the economy and continues to effect business travel. The impact on banks would not take too long to be damaged, reasoned analysts.

However, the bank stocks also face the danger of being left behind during a market recovery that may have started on Monday (March 2). In order to calm market nerves, one of the strategies that the government has implemented is cutting interest rates even further. In fact, President Trump verbally called for the Federal Reserve to help by cutting interest rates.

On Tuesday, the result of the Federal Reserve’s announcement on interest cuts brought that exact undesirable effect on banking stocks across the board. The Federal Reserve announced an emergency rate cut, which sent major banks spiraling downward and actually depressed the market’s overall recovery by its losses.

Bank of America dropped the most at almost 5%, followed by JP Morgan at just over 3%, and Citigroup and Morgan Stanley fell well over 2%. Smaller bank stocks not covered by the indexes also fell along with their counterparts. Low interest rates cut into bank profit margins even while global uncertainty decreases banking businesses across the board.

Banking stocks were not only rocked by the fact that an interest rate cut came, but that it was a half a percentage point rather than a quarter point that was expected. A half a percentage point cut has not been made since 2008 in the heart of the financial crisis. An interest rate cut that drastic can communicate mixed signals: on the one hand it shows a commitment to help stabilize the markets, but on the other hand it communicates how serious the situation is.

Bank margins will be squeezed as the deposit rates cannot move as fast as the market rates. The difference between short term and long term interested rates will likely narrow and thus hurt margins on loan business.