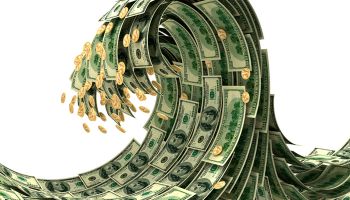 He said prominent fast-growing technology companies, notably including Amazon.com Inc., are hiring at a rapid clip, fueling population growth that is by extension driving need for housing and the services of various small businesses. Deines noted that Amazon alone is currently advertising more than 7,000 job openings in the Seattle area.

"In-migration for jobs here is amazing," Deines said, adding that many of the positions are high-paying tech jobs. "There are construction cranes everywhere. There is actually a backlog of construction projects" in Seattle "because the construction industry has more work than it can handle."

Deines said Sound Financial's bank generated company-record loan originations in the second quarter. Net loan growth was held in the low single digits only because of high levels of pay-downs. More customers are amassing wealth and are paying off old debts. What is more, clients are seeing the values of their properties surge, making it easier for them to refinance both commercial and residential mortgages.

But Deines said the bank's loan pipeline in the current quarter remains hearty.

Among the 10 largest banks based in Washington, median loans advanced 2.9% during the second quarter, while median adjusted nonperforming assets as a percentage of total assets hovered below 1%, according to an S&P Global Market Intelligence analysis.

"Things just look really healthy," said Deines, whose bank's NPAs also are below 1% of total assets. "Real estate is booming; the housing market here is very firm. … The data and the activity do not indicate any weaknesses right now."

Unemployment in Greater Seattle stood at 4.4% in July, down from 4.6% the previous month and below the 4.9% national rate, according to Washington's Employment Security Department.

Although Washington does have relative pockets of sluggishness in less populated areas—the statewide jobless rate is notably higher at 5.8%—the state overall is advancing. Between July 2015 and the same month this year, the state added more than 100,000 jobs.

Paul Turek, the state's labor market economist, said that of the state's 13 sectors, only manufacturing failed to add jobs over the past year.

While led by activity in Seattle, gains have been made in recent months in other nearby markets in the state, including Tacoma.

Melanie Dressel, president and CEO of Tacoma, Wash.-based Columbia Banking System Inc., noted that Washington's labor force has increased by more than 97,000 workers over the past 12 months, with roughly a third of that growth in the Seattle area alone.

"Unless Amazon stops hiring, you may as well get used to it," she said during a recent second-quarter earnings call with analysts. 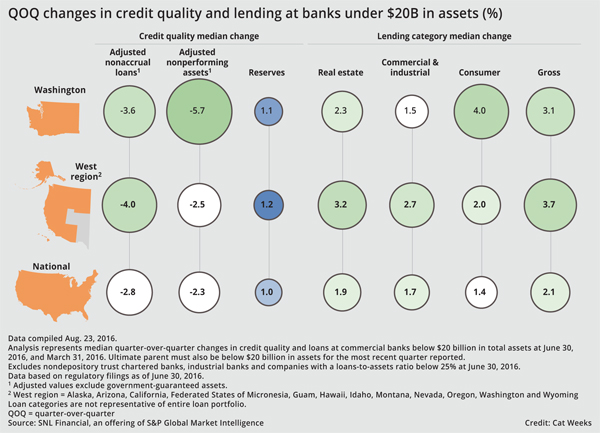 Columbia Banking System grew loans at a 4% rate during the second quarter, according to the S&P Global analysis.

Dressel said Columbia Banking System's second-quarter survey of its business clients found that more than 90% of them are confident in the future of their operations.

"And in fact," Dressel said, "their feelings about their industries' business conditions were at an all-time high."

Among banks based in Washington, only Seattle-based HomeStreet Inc.—at 5.9%—grew loans at a greater clip than Columbia during the second quarter, the analysis found.

HomeStreet Chairman, President, and CEO Mark Mason told analysts during a recent earnings call that the company's residential mortgage business is on solid ground, as is lending to business clients.

"The construction projects that we financed are all primarily on budget and on time. And the market here continues to be very strong," he added. "Demand continues to grow; job creation and household formation continues to support high levels of construction in our markets."