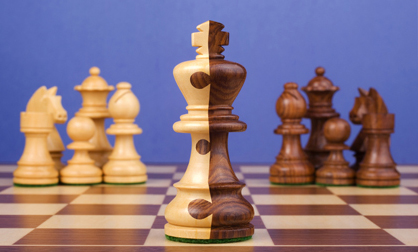 The misalignment or absence of intelligent incentives means that consolidation in the credit union space remains proportionately muted as institutions play a dangerous game trying to ride out troubles rather than focusing on tactical acquisitions.

The nation's credit unions continue to grapple with squeezed net interest margins, low loan demand, and amplified regulatory burdens. But consolidation activity remains concentrated among the most populated sector containing the smallest institutions--those with assets of less than $500 million. Deals have been motivated more by financial distress and avoiding failure than strategy and long-term planning, industry observers and would-be participants told SNL.

All dressed for the dance, no ready partner

North Highlands, Calif.-based SAFE Credit Union would like to grow to between $3 billion and $5 billion in assets, the range at which it believes credit unions have the greatest economies of scale, said SAFE CEO Henry Wirz. But the $1.91 billion institution is having difficulty finding a healthy, similarly sized credit union that wants to partner with it. 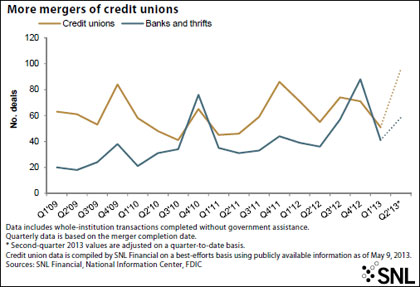 Wirz attributes the lack of a partner to the fact there is no incentive system spurring management to consider mergers until their institution falls into dire straits as membership departs and capital declines.

The credit union executive said bank deals are owner-driven, in that investors exert pressure to explore strategic alternatives that maximize shareholder value. Credit union mergers, on the other hand, are owner-driven by members leaving the institution and placing it in financial distress. Most of SAFE's deals have been the result of a regulator calling on the behalf of a credit union that has been pressured to seek a partner.

"The hurdle is to find the right kind of incentives for management and the board, and those are hard to come by, because the people that control the credit union have to be willing to give up some control," Wirz said.

He later added: "What we have today is an irrational merger and consolidation process in credit unions. It's bad for the whole system the way we're doing it."

Low end of the food chain most active

Activity remains concentrated at the smallest credit unions, SNL data show. The mergers lack a strategic partnership component that has left credit unions with more than $500 million in assets frustrated and at a competitive disadvantage to their bank and thrift counterparts, said Peter Duffy, managing director at Sandler O'Neill.

Credit union consolidation trends mimic broader operation trends in the industry, namely the bifurcation of institutions above and below $500 million in assets. Duffy said the proportionately smaller group of institutions with more than $500 million in assets has created the lion's share of return on average assets and booked most of the industry's membership growth, despite the fact that they cannot merge and acquire institutions like banks and thrifts can.

"The larger credit unions we talk to are really desirous of adding mergers to their strategic plans as acquirors and are completely frustrated by the whole process because logic doesn't enter into it," he said. 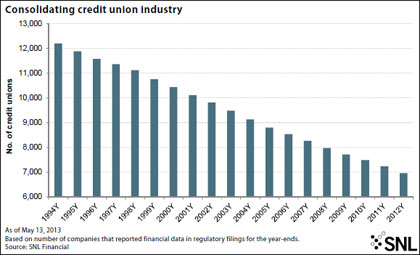 Duffy faulted what he called a "systemic lack of accountability" in the credit union industry because there is no external pressure from shareholders, no slew of regulators and no cutthroat competitors who use acquisitions as a way to gain scale or market share. Average, weak and marginal credit unions continue to exist because their boards are not held accountable and are uninterested in pursuing opportunities that may offer members access to more services or better rates, he said.

"What you're not seeing in the credit union space is the strategic merger--mergers of larger, healthier institutions," said Duffy. He later added, "I know there's a lot of discussion out there about all kind of pickup in merger activity, but the simple truth of the matter is they're mostly tiny."

A standout in the trend: federal-state deals

Charles McQueen, president of McQueen Financial Advisors, said his credit union merger valuation business for the first quarter was double 2012's pace. He has worked with clients from Maine to California and said that most of the surviving credit unions in a potential merger have more than $100 million in assets, while the acquired institutions tend to have between $20 million and $100 million, he said. Those thinking about being acquired have begun to see earnings run low and are trying to figure out who could partner with them while they still have capital. Mergers of very undercapitalized or failed credit unions are becoming more of a rarity for his business.

McQueen added that he is seeing a rise in a different type of strategic merger: federally chartered credit unions merging with state-chartered credit unions. State charters generally have the potential for a more expansive field of membership, causing some federal credit unions to merge and then replace the acquiror's federal charter with the target's state charter to grow their membership base, even if the federal institution was larger before the merger.

But in any merger, upper management teams of merged credit unions often struggle to find re-employment after consolidating, which means many of the credit unions McQueen deals with have executives who are close to retirement age or have other short-term opportunities.

Credit union consolidation is complicated by the desire of many institutions to keep an appropriate equity capital cushion. Dipping below a cushion of about 9% makes some boards nervous, Duffy said, as regulators continues to suggest capital requirements are going to increase. Credit unions can only use retained earnings to raise capital, whereas banks can raise equity or debt to increase capital cushions.

Smaller credit unions facing decreased revenue outlooks but that are otherwise healthy may feel the pressure to find a larger partner as fee income remains under duress, lending demand continues to slacken, and capital declines.

But the longer a troubled credit union remains independent, the more its capital is eroded and its value diminished. That could make it harder to find a partner willing to merge with it, forcing the NCUA to liquidate. Wirz said he fears an increase in liquidations would stress the insurance fund, as well as destroy the value of the credit union through a fire sale. 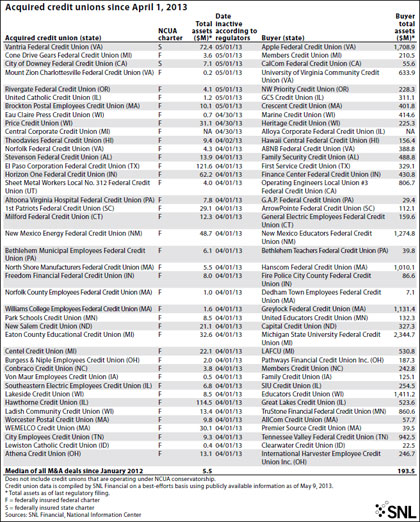