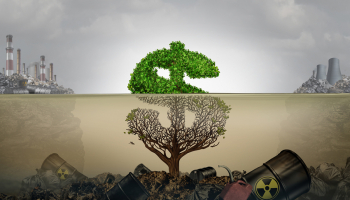 Global climate finance and investment is approaching $100 billion a year, the target set as part of the 2015 Paris Agreement, according to a new report published jointly by Canada and Germany.

The report found that $83.3 billion was mobilized through impact investment projects and other investment methods to help developing countries “combat and adapt to climate change”, based on OECD quoted in a joint statement from the two countries.

However, a separate report from the United Nations has put the required figure for achieving the goals of the Paris Agreement at $4-6 trillion a year.

“As the world confronts the rising impacts of climate change, it is more vital than ever for developed countries to make good on their commitments on climate finance, and to provide developing countries the resources to fight climate change, and cope with its consequences,” said Steven Guilbeault, Canada’s minister of environment and climate change.

Jennifer Morgan, Germany’s state secretary and special envoy for international climate action, added that, although the report “shows the richness of activities happening, it is clear that more action is needed”.

She highlighted the need for more adaptation finance to help economies prepare for the effects of rising global temperatures. At the COP26 conference last year, countries pledged to double the amount of money for adaptation finance.

“As a group of contributors, but also as shareholders of multilateral development banks, we need to continue to work together to push for more climate ambition in the global financial system,” Morgan said.

The report makes four key recommendations for national governments signed up to the Paris Agreement. These include enhancing transparency around climate finance, reducing barriers to access, and improving the mobilization of private capital.

The research coincided with a similar report from the UN, which warned that the current trajectory of greenhouse gas emissions puts the world on course for an average temperature rise well in excess of the 1.5˚C maximum specified by the Paris Agreement.

The UN report estimated that a “global transformation to a low-carbon economy is expected to require investments of at least $4-6 trillion a year”. While this was a “relatively small” percentage of total global financial assets, at was “significant in terms of annual resources needed”.