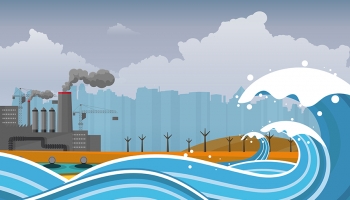 A collaboration of investors, business leaders, former regulators and non-profits have written to Federal Reserve chairman Jerome Powell to lobby for US regulators to acknowledge climate change as a “systemic financial risk”.

Regulators should “immediately consider whether decisions being made right now could inadvertently exacerbate the climate crisis”, the letter stated.

The 72 signatories to the letter included asset managers such Impax, Trillium and Epoch Investment Partners, alongside major pension funds and public sector bodies.

“It is more clear than ever that the climate crisis poses a systemic threat to financial markets and the real economy, with significant disruptive consequences on asset valuations and our nation’s economic stability,” the letter stated.

“You lead a critically important agency that has a mandate to protect US market stability and global competitiveness. This carries with it a responsibility to act on the climate crisis right now, and to guide our transition to a net-zero future.”

As well as Powell, the letter was also addressed to regulators including the Securities and Exchange Commission (SEC), the Office for the Comptroller of the Currency and state insurance regulators.

The letter was organized by Ceres Accelerator for Sustainable Capital Markets, which recently published a report setting out how climate change will affect the financial services sector.

As well as highlighting the physical risks from climate change – primarily rising temperatures and more extreme weather events such as wildfires and storms – the report warned of hits to global productivity and financial stability.

The report listed more than 50 recommendations for “affirmative steps” that financial regulators could take to ensure sustainability was “embedded in market valuation”.

Regulatory action was important now as a later, more sudden reaction could also be damaging, the report said.

Brooksley Born, former chair of the Commodity Futures Trading Commission and a signatory to the letter, said: “Regulators have a unique vantage point from which to assess the implications of long-term threats to our economy, and they must find ways to provide incentives to firms and markets to build resilience against these threats.

“The imperative to act is crystal clear, and the action steps regulators can take have been laid out for them. They should consider them immediately.”

The lobbying follows statements and action from several regulators seemingly against the ESG/SRI movement. The Department of Labor last month published a planned new rule requiring pension fund fiduciaries to only consider factors that had a direct financial impact on beneficiaries.