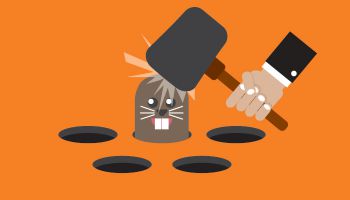 Anyone working at a small bank or a small company understands the dilemma: you always have more priorities than you have time or resources to deal with. It requires discipline not to flail about, lurching from crisis to crisis, or from bright idea to bright idea. A “whack-a-mole” strategy never works. Nothing gets finished. Everyone becomes exhausted.

My colleague, Steve Cocheo, and I were discussing this recently in the context of the challenges community banks face in the digital age. He recalled a relevant comment made by Nebraska banker Alice Dittman, former CEO of Cornhusker Bank, Lincoln. During an interview with her many years ago Cocheo asked about the bank’s strategic planning. He recalls Dittman saying, “We have two major and two minor initiatives.” That was her plan for the year—implement two major and two minor projects to move the bank forward.

It seems to have worked. The 115-year old bank is still going strong.

Easy to doubt your judgment

In Dittman’s simple statement lies a great truth—concentrate your effort. It’s similar to the tactic written about in military books in which a general concentrates his forces in a battle. (Civil War history buffs will point out that Robert E. Lee famously divided his forces at Chancellorsville and defeated the Union army, so there’s always an exception. But indecision never works.)

This matters especially now because bank leaders need a stout heart and a clear head to find their way in a world very different from what they may have come up in during the earlier parts of their careers. It’s easy to doubt your own judgment when everything and everyone seems to be saying, “No, that doesn’t work anymore—this is the ‘new normal’.”

Well, sometimes that is true and sometimes it isn’t. The essence of good judgment is to know which is which and then make a decision. That’s not something that can be taught, exactly, but we can always learn from others if we set aside preconceived ideas and ego, and have a willingness to adapt and take calculated risks.

The right market plus innovation

Dittman retired as CEO of Cornhusker Bank in 1992, remaining active on the board for another decade. She is now chairman emeritus of the $559 million-assets bank. Her son, John Dittman, is currently chairman. In a well-done interview last February with columnist Cindy Lange-Kubick of the Lincoln Journal Star, Dittman said her parents took a chance when they made the decision in 1960 to move Farmers State Bank—the small bank in Davey, Neb., they had bought in 1949—to Lincoln, a much larger market, where they renamed it Cornhusker Bank. In hindsight, Dittman observed that “the bank in Davey could not have survived the changes in technology and continued burden of complicated regulation,” particularly from the Dodd-Frank Act.

“Small banks don’t always survive,” she continued in the interview, “but if they have the right market, like Lincoln, … they have the opportunity to continue their growth. Innovation is important, too,” she added, pointing out that Cornhusker Bank during her tenure was the first bank in Nebraska to offer image check statements. No doubt that was one of the bank’s two major initiatives for that particular year.

But the essence of the bank’s success, said Dittman, never changed: treating customers with respect and valuing their commitment to the bank, something that only happens, she said, “when management, stockholders, and staff have the same goal of providing excellent, caring service.” The bank’s motto has long been, “Committed to Your Success,” and Dittman observed that the word “success” in that context is meant to apply to “both sides of the desk or counter”—customers and employees.

Waste of time and energy

To adhere to and apply that motto while dealing with economic, demographic, political, regulatory, and technological changes takes a singular focus and confidence. Dittman allowed that there were occasional sleepless nights during her long banking career, but when making decisions, she wasn’t worried.

That’s a wonderful attribute. Not everyone has it or has it to the same degree. Doubts and worries crop up from time to time for most of us, which can tend to result in the “flailing about” mentioned above. When those two adversaries show up, the best advice I’ve ever heard is to quietly think, “I’ve been through worse before,” and then go about figuring out how do deal with this new situation, letting your own experience guide you. Doubt and worry, we think Dittman would agree, are a waste of time and energy.

All that said, clearly it’s essential to keep up with what’s going on around you, where the pace of change is faster than ever.

Everybody will have their own way of dealing with the pressures of endless priorities. Were Alice Dittman a CEO again today, I suspect her approach would be much the same as before, other than taking advantage of the capabilities new technologies make possible. While much has changed, certain principles endure, which, if applied, enable one to navigate the change.

How do you handle change and its challenges in your job? Tell us in the comment section below.

Tagged under Management, Duties, Blogs, Like It or Not, CSuite, Community Banking, Feature, Feature3,

More in this category: « “Sticky” for the right reasons Lessons from the fast lane »
back to top