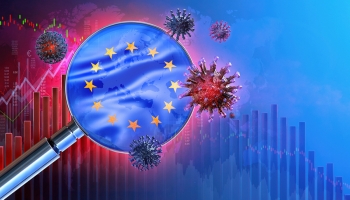 A second period of lockdown could cause credit losses for European banks to hit €800 billion ($925.6 billion) over the next three years, according to research by consultancy group Oliver Wyman.

The continent’s banks are already facing €400 billion in losses due to the impact of the COVID-19 pandemic, the research showed, and a severe spike in cases could double this amount if it means governments are force to restrict movement again.

Despite the severe impact so far, this was still only 40% of the losses seen by Europe’s banking sector during the global financial crisis, the report found.

Oliver Wyman’s research also forecast that 5% of banks in the European Union and the UK were likely to be “troubled” by 2022, classified as “capital below minimum levels and profitability too weak to rebuild”.

More than half of capital in the continent’s banking system was expected to be run by banks “in limbo” – with sufficient capital to meet regulatory requirements but vulnerable to future shocks.

“The pandemic is unlikely to cripple the European banking sector,” said Christian Edelmann, co-head of EMEA financial services at Oliver Wyman. “However, many banks will be pushed into a ‘limbo state’ with very weak returns.

“Ambitious restructuring efforts will be needed, but to succeed they will need engagement and support from policymakers and regulators. That includes agreeing transformation plans with short-term capital impacts, encouraging consolidation to happen more quickly and accelerating single banking market efforts. The alternative is a system that struggles to support economic growth and falls behind the rest of the world.”

The research contrasts with recent stress tests of US banks, which showed the sector to have entered the pandemic in robust shape and capable of withstanding expected credit losses.

US banks were far stronger going into the coronavirus crisis than they were before the global financial crisis, according to analyses from the Federal Reserve and rating agencies.

Even under the harshest of the Fed’s Dodd-Frank Act stress tests, no banks were expected to face solvency issues.

“The small group of large UK banks entered the crisis in a relatively strong position, with average core capital ratios of over 15% and returns on equity of over 7%, both above European averages,” Gillespie said. “The vulnerability comes from overleveraged consumers and corporates that have been wounded by the UK having one of the biggest economic hits so far.”