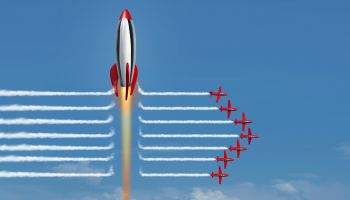 Ten years ago, the first public blockchain was developed as a distributed, decentralized, public ledger for transactions of the cryptocurrency bitcoin. While its meteoric rise, fall, and recovery tells one dizzying story, the real significance of blockchain’s use as a distributed verification mechanism was far more profound.

By threatening the role of financial institutions as the trusted broker of all financial transactions, the arrival of bitcoin created a potentially life-threatening blow to banks. How were they to respond?

Aware of the possibility of disintermediation, some incumbent banks did something atypical of most large, established companies under threat: they studied the disruptor early on and took a page from its book. Rather than try to fortify their standing solely through conventional defensive methods, e.g. better pricing, they decided to embrace blockchain technology and focus specifically on its ability to enable low-cost, high-speed transactions.

Some traditional banks discovered opportunities to enhance their own value proposition to customers by understanding the advantages of blockchain and determining how it could be integrated into their business model. They took aim – simultaneously – at what is arguably cryptocurrency’s key vulnerability: its anonymity.

An increasing fear has developed among market participants that one’s assets could easily disappear due to a technical glitch or cyberattack, and there would be no one to call for help. You don’t have to look far afield to find the basis for such anxiety. Over $1 billion was stolen in the first half of 2018, and by the end of the first quarter of 2019, cryptocurrency fraud had already hit $1.2 billion.

For the past four years, we’ve been studying CEOs of legacy companies and what they’ve had to say about leading in a time of disruption. One insight we gleaned from our discussions was that taking the approach of going on the offensive, seizing new competitors’ disruptive model and forward momentum, then turning both against them, introduced the possibility of beating disruptors at their own game. We dubbed this approach disruptive jiu-jitsu—and classified it as one of the five attributes of the “undisruptable CEO.”

To this end, a growing number of banks have now been experimenting with blockchain—a known disruptor—as an essential part of their global infrastructures, while simultaneously chipping away at the principle of decentralized trust. For instance, JP Morgan just began consumer trials of its own cryptocurrency, JPM Coin.  Such incumbents are reasserting their historic role as trusted brokers and promising, “We’re here for you if you have a question or concern.” The underlying message could just as well continue, “And who knows which start-ups will be here at all this time next year?”

The jury is still out on blockchain’s long-term impact on banks and the extent to which it will disrupt traditional financial intermediaries. But if their exercise in disruptive jiu-jitsu is successful, these incumbent banks might very well be able to slow down blockchain’s most disruptive potential impact on their industry, even as they aim to capitalize on the technology’s benefits.

True to its martial arts namesake, disruptive jiu-jitsu is an aggressive art and discipline. More broadly defined, beyond our bitcoin example, it refers to a strategy in which CEOs scan external markets for evidence of new and unusual patterns or models of disruption, and then deconstruct those disruptive elements to consider how their components could be aligned with their own business and operating models. CEOs who wish to do this need the foresight to recognize an opposing force, the courage to harness its energy, and the will to forcefully redirect it. In so doing, they can exploit the adversary’s own innovation to disrupt the disruptor.

Disruptive jiu-jitsu is, at heart, an offensive maneuver, not a defensive technique. But it is decidedly not a replacement for traditional, incremental defensive responses to a market threat—such as hiring more salespeople, increasing marketing spend, making operations leaner, or taking a risk on a thoroughly new approach to meeting end-users’ needs. Rather, it is necessary to join such tactics, given the existential necessity of both defense and offense in reaction to a business-killing innovation.

To clarify that thought, there are disruptions, and then there are disruptors. For incumbent banks in particular, the threat coming from app-based startups can’t be ignored. Based on the demographic fact that 34 percent of U.S. workers are currently freelancers and by 2027 freelancers are expected to be a majority, there are apps for freelancers that offer instant credit at competitive rates, that traditional banks have hitherto not matched for the nontraditionally employed. These are “banks” for freelancers, if you will.

Traditional banks can respond to the threat of such challengers by adopting a disruptive jiu-jitsu mindset. Other than taking the “if you can’t beat ‘em, join ‘em” approach and acquiring or partnering with them, one of the best approaches for banks is to figure out the essence of what those start-ups are doing, turn it to their own advantage, and, matching their DNA, beat them at their own game. In essence, in figuring this out, they’d be disrupting the disruptors.

Why is disruptive jiu-jitsu such an important technique for CEOs to learn? Incumbent organizations are facing disruptive threats at an increasingly frequent pace. Rapid technological innovations in increasingly ecosystemic markets are raising the risk of disruption across all industry sectors. Technologies such as artificial intelligence, machine learning, analytics, robotic process automation, and blockchain present new ways to meet customers’ needs—and take them away from traditional incumbents.

They promise products and services that cost less while offering a tailored, convenient, and frictionless customer experience. In short, today’s marketplace is rife with opportunities for competitors to build new business models that take advantage of technology, or even simply a confluence of technological, social, and economic trends. This can disrupt established companies and even whole industries. Traditional banks might consider taking the lessons from these forces and learn to put them at the service of their customers, if they want to keep them.