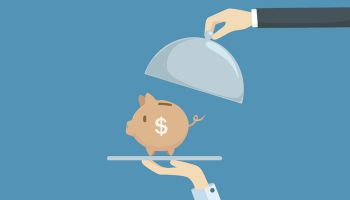 After a multiyear lull, interest in starting up new banks—referred to as de novos in the industry—could finally be gathering some modest momentum in pockets of the country, notably including simmering Southern California.

Since the start of this year, four banks did come into organization. Three of them are in Southern California, most recently including Endeavor Bank in San Diego; it filed its application in August. The other two are SoCal Bank and Blue Gate Bank, both in the Orange County area. Blue Gate had its application approved but has not yet opened.

The Southern California region has rebounded from the depths of the last downturn and is growing both on the economic and population fronts, providing banks with steady lending opportunities.

Jacob Thompson, managing director of investment banking at SAMCO Capital Markets, said in an interview that he would expect de novo activity to emerge primarily in very large and growing markets where there is a lot of wealth, such as Southern California.

That kind of activity is feeding more talk about de novos.

"It seems to me that there is a suggestion by regulators that there might be an end to the informal moratorium on de novos," Joseph Fenech, co-head of research at Hovde Group's equity research department, said in an interview. "There has seemed to be a push recently to jumpstart the process."

But the FDIC also acknowledged that actual application levels remain low and that, as long as interest rates hover near historical lows, a nationwide de novo drought is likely to persist.

That has left de novo activity light over the past year, much as it has been every year since the aftermath of the 2008 financial crisis, when the low interest rate era began and regulations started to mount.

Since mid-2015, just five de novos were proposed via applications to regulators; none of those has opened yet. That follows a dearth of new banks in prior years. Going back to October 2009, only five new banks have formed.

"I think the regulators would welcome new applications and I think that the industry recognizes we need some new blood" following several years of consolidation that has shrunk the base of community banks, Thompson of SAMCO said. "But the barriers to entry are still quite high." 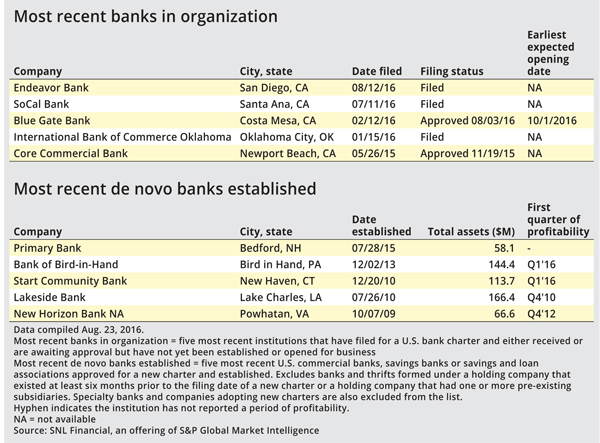 More than 200 of the banks that opened between the mid-1990s and the crisis failed. Many of those occurred amid the real estate meltdown of the 2000s, serving as a reminder that young banks are more likely than others to falter when economic tumult strikes, regulators have said. The FDIC says that the failure rate of banks created between 2000 and 2008 was more than double that of other community banks.

That explains why the agency in 2009 lengthened from three years to seven years the period during which new banks must contend with higher levels of regulatory scrutiny and greater capital conditions.

But, following years of economic recovery and strong credit quality across the industry, the FDIC in April said it would go back to the three-year intensive supervisory period, a move widely viewed as a step toward inviting more de novo applications. Read FDIC’s release

That move meshed with expectations earlier this year for the Federal Reserve to raise interest rates in 2016, a development that could have bolstered profitability potential for many banks, including new ones.

But Thompson noted that global economic struggles dashed most hopes of higher interest rates this year, and he emphasized that, following the Dodd-Frank financial reform legislation, regulatory challenges and costs, broadly, remain burdensome on small banks. Additionally, while the FDIC appears to have eased its stance on de novos, Thompson said new banks are facing capital requirements that are much higher than prior to the crisis.

He pointed to SoCal Bank's proposal as a case in point. It calls for an initial capitalization of $30 million, with expectations for roughly $300 million in assets in its first three years of operation. Thompson said that, before the last downturn, a new bank of this size would have needed only about half as much capital initially.

"I think that, at least informally, they have put everyone on notice that the initial capitalization requirements will be a lot higher this time around," he said.

That, Thompson said, leaves investors nervous and the majority of them preferring to invest in or acquire existing small community banks, trying to build them out by adding business lines or moving into new markets.

Fenech of Hovde Group added that it typically takes a new bank two or more years to break even and then produce profits, and with reasonably priced existing bank stocks to get into, it is hard to convince investors to take on the execution risk of a de novo.

Kevin Dobbs is a senior reporter and columnist. The views and opinions expressed in this piece represent those of the author or his sources and not necessarily those of S&P Global Market Intelligence. Eazaz Khan contributed to this article.