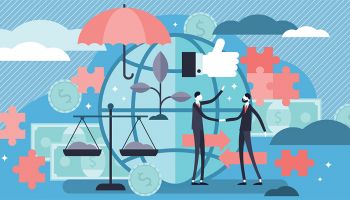 When one thinks of ethical business practices for banks, things come to mind such as servicing legitimate businesses, building into communities and perhaps even funding socially responsible projects.

A large bank is voluntarily taking social responsibility to an even higher level. Recently, ABN Amro voluntarily gave information regarding seven companies that the bank feels may be taking advantage of its workforce to the ministry of social affairs in its home country, the Netherlands

How could ABN Amro know just by bank records? It used an algorithm of course. The algorithm was made to check on patterns that bank accounts have that has more than 25 indicators of potential exploitation of the work force.

ABN Amro stated that the companies may be underpaying its work force, possibly even rising to the level of human trafficking in the sense that workers are entirely dependient on the business for survival. This often happens to immigrants to western countries.

While banks often cooperate with investigations, this is an unusual case in that ABN Amro was acting on its own initiative. A bank spokesperson stated that they are looking in their systems to recognize victims of human trafficking, not just reporting it when they happen to come across something that seems odd. Minimum wage workers might take all of their many out of their bank account, for instance, right after being paid.

The Netherlands, like the United States, has a problem with workers being exploited, and the government has raised major concerns over the practice as it damages the country’s image. Amsterdam in particular has struggled with its image as it is known as an open society when it comes to drugs and prostitution, although tourism is on the rise.

The initiative by ABN Amro Bank raises some interesting questions about the role banks have in reporting questionable use of bank accounts. On the one hand, banks can help law enforcement fight against egregious crimes, in this case even international human trafficking. On the other hand, the issue also raises privacy concerns that banks will use private information to investigate practices by its business customers.

Not every company that gets flagged due to an algorithm has necessarily done something wrong, and an investigation can cost companies money.

Still, if banks are respectful of the information and will only raise the flag on extremely suspicious practices, it can help society and strengthen the reputation of the banking industry.