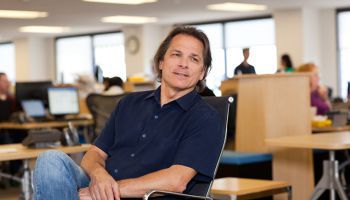 Steve Ellis of Wells Fargo debated banking disruptor Brett King about the future of branches at the 2017 Money 2020 conference.

In September consultant Lisa Frazier will succeed Steve Ellis, head of the Wells Fargo Innovation Group, as he retires, winding up nearly 31 years in technology posts at the bank.

“Steve has been a champion for customer-centric innovation since he joined the company more than three decades ago,” said Avid Modjtabai, head of Payments, Virtual Solutions, and Innovation for Wells Fargo. “He has been a mentor to many, and his influence is reflected in how we’re reimagining the future of banking. He has been a trusted advisor to me over the years, and I wish him the best in his well-deserved retirement.”

Under Ellis’ tenure the Wells Fargo Startup Accelerator program, a much-emulated effort to help small fintech companies get traction, was founded. The upcoming Greenhouse App for Millennials and other customers was also developed on his watch. Ellis is a member of the Banking Exchange Editorial Advisory Board.

In an October 2017 interview with Banking Exchange Ellis advocated a middle road for innovation, an area where agility and “fast fail” philosophy often rule.

“You have to let some of the new technologies breathe a little bit,” said Ellis. Sometimes, he said, a slower start can help a new technology grow into itself. Rushing the process can lead to a premature death, especially if the infrastructure demanded for success isn’t there. In some ways the early development of the web by banks fits this scenario, he said.

Frasier was scheduled to start at Wells on May 29. She has extensive experience in digital disruption, customer experience, and product innovation. She has been active in working with banks in Australia and elsewhere.