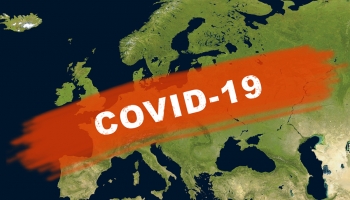 Europe’s banks have held up well so far during the pandemic crisis, according to an analysis by Deutsche Bank – but “more pain” is expected in the near future.

The continent’s top banks have managed to “contain the fallout” from the COVID-19 pandemic, judging by their first-quarter results, wrote banking analyst Jan Schildbach.

Loan loss provisions increased dramatically and “almost wiped out industry profits” as banks braced themselves for a spike in defaults expected in the months ahead. Net income fell by 84% quarter-on-quarter.

Many larger banks also cancelled planned dividend payments to help shore up their capital positions. US banks including JPMorgan Chase, Bank of America and Citigroup similarly decided to suspend share buybacks in March to ensure they could maintain capital buffers.

However, the analyst highlighted that European loss provisions grew by less than in the US, where the top banks on average increased provisions more than fourfold.

This is despite expectations that any recession as a result of the economic shutdown will hit Europe harder than the US.

“While policymakers have instructed European banks not to provision aggressively and use all available flexibility in the accounting framework, this risks a repeat of the precarious post-financial crisis experience,” the analyst said.

“US banks’ loan loss provisions were back at normal levels already in 2011-12, whereas it took their European counterparts much longer, until 2014-15. One of the reasons [was] the considerably lower provisions in Europe and the bolder reaction of US banks during and immediately after the financial crisis in 2008-10.

“The prolonged burden on European banks enabled their US competitors to pull ahead and gain market share, especially in the capital markets business.”

Since the financial crisis, 2018 was the only year in which all major European banks were profitable, according to Deutsche Bank’s analysis.

Revenues and costs fell “mildly” in the first three months of the year, Schildbach reported, while growth in corporate loans and other lending saw balance sheets expand by a record 10% compared to the end of 2019.

This demonstrated the “more positive role” played by banks in the current crisis, he added.

Banks across Europe have stepped up to help facilitate government-backed lending programs to small and mid-sized businesses. In the UK, the government launched a £330 billion ($404 billion) loan program to offer companies up to £5 million each, while France has outlined a guarantee program worth €300 billion ($328 billion).

Germany has pledged unlimited support to its businesses through what the government described as a “bazooka”, to help companies ride out the crisis.

“In this sense, the corona crisis offers the banking industry ‘redemption’, i.e. an opportunity to somewhat restore its reputation as a good corporate citizen,” Deutsche Bank’s Schildbach said.