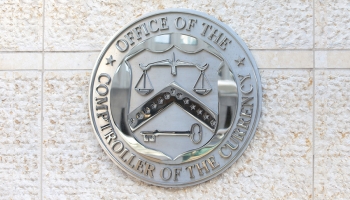 The Office of the Comptroller of the Currency (OCC) has agreed on a series of measures with two banks in order to address “unsafe or unsound practices”.

The OCC announced late last week that it had struck formal agreements with United Trust Bank in Palos Heights, Illinois, and Texas Citizens Bank in Pasadena, Texas, requiring the institutions to undertake a series of remedial measures to address shortcomings in their operations.

The formal agreement between the OCC and United Trust Bank requires the bank to establish a compliance committee of at least three members, the majority of which must be independent. The committee should report quarterly to the board and the OCC setting out corrective actions needed and taken, and their results, the regulator said.

The bank, which provides business and personal banking services, will also send a revised strategic plan to the OCC within 120 days, with the board subsequently promising to review performance against the plan on a monthly basis and submit written reports to the regulator quarterly.

United Trust Bank must also set out a capital adequacy plan within 120 days, identifying all risks to the capital position of the bank, along with a liquidity risk management program and a credit administration program. It has also pledged to develop and implement an IT risk management report and a consumer compliance program.

The agreement between the OCC and Texas Citizens Bank – which focusses on owner-managed businesses – requires similar measures to be put in place by March 31, 2020.

The regulator has also required the bank to develop a “problem loan identification” program to ensure that risks are properly accounted for and reflected on the group’s balance sheet and staff are held accountable for failings.

Texas Citizens Bank must also update and maintain full credit relationship records to address concerns expressed by the OCC in a previous report that some of the bank’s assets were “doubtful” or “substandard”.

The OCC has not published any additional information about the shortcomings that prompted the actions against the two institutions.

Banking Exchange has requested comment from both banks regarding the agreements.