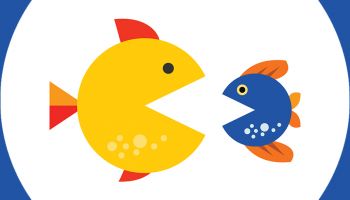 Last week, it was reported that Charles Schwab is speaking with USAA to acquire the company’s wealth management business. The news may be just the beginning of a very busy fall when it comes to acquisition talk in the bank and broader financial corporation market as the stock market is strong, but the midsize companies are still very affordable.

Richard Kovacevich, former CEO of Wells Fargo said this week, “Anytime you have high regulations in any industry, you get concentration, and banks are cheap.” Mergers and acquisitions seem to be focused on smaller banks across the board due to regulatory restrictions on larger banks, say experts.

While the SunTrust and BB&T merger went through in February, Deutsche Bank has tried and failed several times to agree to terms with other interested banks. Also, scale only benefits large banks so much with technology being critical to a bank’s long-term strategy.

Key markets and lower cost acquisitions seem to be the next phase. Larger banks have cash and smaller institutions are not unrealistically high in cost at the moment as banks have trailed other stocks. Kovacevich told CNBC’s Closing Bell, “If you are going to acquire, this is the time to acquire financial institutions."

This week will show which of the larger banks could be in the strongest position to shop for smaller assets as Goldman Sachs, JP Morgan Chase, Bank of America, Morgan Stanley, American Express, Wells Fargo and Blackrock all will report earnings. The market is optimistic that the banks could outperform after Citigroup beat Wall Street forecasts last week.

With technology firms trading at much higher multiples than financial institutions, and companies such as Facebook looking to get into the financial sector, traditional small and midsize banks may have interested parties beyond their larger competitors in the banking sector.

However, technology firms may shy away from the market as it will put them under increased scrutiny from lawmakers. The market noted last week that Facebook’s proposed currency, Libra, will face intense questions from Washington D.C., much more than Bitcoin has ever faced.

If the financial sector’s multiples still trail the broader markets, however, look for a busy end of 2019.