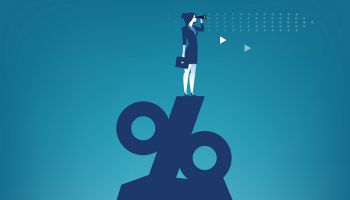 A flattening yield curve is sparking fears that the Federal Reserve could tip the economy into recession by raising rates too quickly, analysts say, but the central bank is showing little sign of concern.

While the closely watched spread between longer-term and shorter-term Treasury yields has reached its narrowest levels in more than a decade, an inversion in the yield curve is not in store in the short term, analysts say. But some worry that an inversion could happen if the Fed proceeds with its current plan on interest rate hikes over the next couple of years.

An inverted yield curve has a "pretty unblemished forecasting record" of signaling an upcoming recession, only putting up a false flag once in recent history, said Joseph LaVorgna, chief economist for the Americas at Natixis.

"The Fed should proceed very cautiously and very slowly with their rate hikes," he said in an interview.

In March, Fed officials opted for their sixth rate increase since December 2015 and indicated that they may bump up rates at least five more times over the next two years. The central bank's gradual tightening has pushed up yields for shorter-term Treasurys, which are more driven by changes in Fed policy. Yields for two-year Treasurys are now around 2.5%. [The Fed stayed on course in its most recent announcement—Editor] 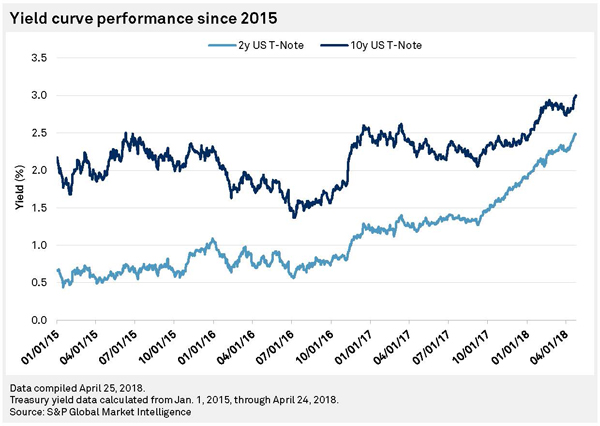 Longer-term rates, which are more reflective of expectations for future growth and inflation, have also edged up but not as quickly. On April 24, yields for 10-year Treasurys surpassed the 3% threshold for the first time since January 2014, flashing some signs that they may finally be gaining ground.

The spread between the two has narrowed to around 50 basis points in recent weeks, significantly less than the roughly 100-basis-point difference at this time in 2017. The yield curve would invert if two-year Treasury yields jump above 10-year yields.

Investors would likely read such an inversion as a sign of a recession "irrespective of whether that is a true reflection of the underlying economic reality," wrote Chris Turner, head of foreign exchange strategy at ING, in a note to clients. It is possible, he added, that "investors are pricing in growing risks of a Fed policy mistake" where the central bank keeps raising rates even though the economy is no longer seeing substantial strengthening.

Fed officials, though, have largely downplayed worries about the yield curve. For example, Fed Vice-Chairman for Supervision Randal Quarles said April 18 that the recent flattening is not surprising and does not signal that a recession may be in store.

Some analysts agree with that assessment. Liz Ann Sonders, chief investment strategist at Charles Schwab, wrote that the U.S. has "never had an economic recession with [company] earnings growing as sharply as they are today," even if the Fed's tightening is increasing volatility in the markets.

The current economic expansion has "a shot at making the record books," said Ed Yardeni, president of Yardeni Research, pointing to the leading indicators index from the Conference Board as one sign that GDP growth will continue.

Fed officials have also argued that the yield curve will steepen as they continue trimming the central bank's balance sheet, which swelled to roughly $4.5 trillion after the financial crisis. Researchers at the central bank have estimated that its asset purchases during the crisis held down 10-year Treasury yields by about 100 basis points, shrinking the "term premium" that rewards investors for purchasing longer-term securities. As these reductions take place, 10-year Treasury yields will pick back up and help ease concerns over a flat yield curve, incoming New York Fed President John Williams said April 20.

But Chris Low, chief economist at FTN Financial, said he was skeptical that would happen. For one, he said, the Fed's extensive communication on the plan for those reductions has let investors fully account for their effects. "Just as the market priced in the start of [quantitative easing], so it has priced in the end," he wrote in a note to clients.

He also said Fed officials seem to be trying to "jawbone long yields up" to avoid inverting the yield curve, a strategy he said would not work.

"When the curve is flat, let alone inverted, it is not because lenders are no longer demanding a term premium, as Fed commentators would have it," he said. "It's because the Fed has raised short-rates well above what the market can bear."

Baby Verma contributed to this article.

This article originally appeared on S&P Global Market Intelligence’s website on April 27, 2018, under the title, "Flattening yield curve may be warning of flaw in Fed's rate path"