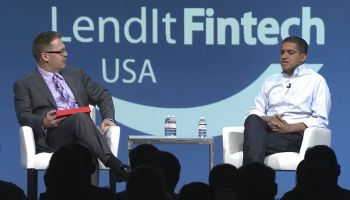 Omer Ismail, head of Marcus By Goldman Sachs, right, discusses his young operation's early success and its thirst for fintech talent in a keynote session interview with LendIt Fintech co-founder Peter Renton. For a link to a video of this event, see the end of the article.

Since its launch 18 months ago, Marcus by Goldman Sachs has done two things that would seem to signal future plans of the Wall Street firm’s mega-fledgling’s consumer financial services operation. Except that maybe the wrong hint could be taken, according to its top officer.

Peter Renton, co-founder of the LendIt Fintech conference, in a keynote interview session there on April 9, asked Omer Ismail, chief commercial officer and head of Marcus, about the significance of two events.

First was the September 2017 liftout of 20 fintech engineers, risk managers, product developers, and more from Bond Street Marketplace, an alternative small business marketplace lender that was in some difficulty. Second was the January 2018 acquisition of Final, a credit card startup.

Those deals mean Goldman’s Marcus (the name comes from founder Marcus Goldman) is going to go into those businesses, right? asked Renton.

“I wouldn’t read it that way,” said Ismail.

Continuing, Ismail said that “there is a huge competition for talent going on” in fintech. He refers to staff picked up through such deals as “aqui-hires,” and said that Marcus is constantly looking for talent to build out its team for its growing product line.

For example, Marcus recently announced plans to open an office in San Francisco, a major fintech hub that is near Silicon Valley, to be headed by the former head of engineering for Skype. (A good sample of how interested Marcus is in finding young fintech engineering talent can be found on Glassdoor.)

That office needs to be filled up with engineers and product developers, Ismail said. “Getting the right people has been a major focus,” he said.

Ismail portrayed Marcus as a opportunity for fintech talent. He said many staffers are working for companies that haven’t achieved major scale with their ideas, for one reason or another. Ismail said an attraction his organization holds out is the opportunity to build new things, rather than spend time fixing things.

Growth at startup under 149-year-old roof

Part of what sets Marcus apart from many of the players attending LendIt Fintech is that it is part of a bank, Goldman Sachs Bank USA. (Goldman Sachs became a bank holding company, and its former trust company became an insured commercial bank in 2008, during the financial crisis.)

From its start in 2016, Marcus has grown to the point where, Ismail said, it has $3 billion in loans; $20 billion in deposits, including those moved under the Marcus program from the main bank; and 500,000 customers. Marcus began by offering online debt consolidation loans to prime customers. More recently it has launched deposit accounts and home improvement loans. Loans are promoted as no-fee, fixed-rate products.

The company is essentially a disruptor from within the industry. Ismail noted that the Marcus online platform and its other IT enable it to be a bank that is not burdened with legacy systems. This enables it to make shifts in methodology faster. While its lending uses traditional metrics, it also uses newer factors and its systems are designed to permit additional changes quickly, according to Ismail.

“Over time we expect to add additional products to the Marcus platform,” said Ismail. Overall, he said, “our job is to educate our customers, give them that education and the tools to improve their lives.”

Ismail spoke as much about top management’s directive to proceed conservatively and deliberately in its growth as he did about expansions that are being contemplated.

“We are in the first innings of what we can do with those products,” he said of its fixed-rate loans and deposit accounts. But in the next breath he noted that the company labs were working on all kinds of ideas. He said his operation is considering revolving credit, credit cards, wealth management, and more.

Ismail said expansions must meet three tests before they can move forward. First, the company wants to use the Marcus brand to venture into product areas where current offerings contain significant pain points for customers—“our engineers are on a mission.” Second, the company prefers to move into large markets, and third, they should have deep profit potential.

Ismail said he works under some strictures, such as lending in recognition of where the country’s credit cycle is, and to not take chances with compliance issues.

“The direction from our senior leadership was to build it right and go slow,” said Ismail, “and that’s the direction we’ve been following.”

[Renton seemed taken aback by the “slow” comment. The figures given earlier came from Ismail’s answers to Renton’s questions. The Goldman annual report indicated $2.3 billion in loans from launch to yearend 2017, deposits of $17.1 billion, and 350,000 customers at yearend. So that would mean growth of about 30% in loans, 17% in deposits, and almost 43% in customer growth since yearend.]

But beyond that, he said, “there are very few rules” at Marcus. He said the brand is creating its own culture within the Goldman Sachs organization.

“We are trying to create a culture and an atmosphere where we can attract the right talent,” said Ismail.