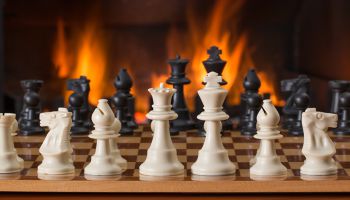 A long-time investor in HomeStreet Inc. is gearing up for a proxy battle for board representation in an attempt to hasten the bank's transformation away from mortgage banking and improve returns.

Roaring Blue Lion Capital Management LP Managing Partner Charles Griege Jr. launched a proxy campaign for two nominations to the board after a letter-writing campaign in fall 2017 failed to garner him a seat. The company has said Blue Lion's proposals and nominations are invalid, and it noted that it is already in the midst of a transition plan that will pay off in the long run.

Griege said he was motivated to activism because of the bank's underperformance in enviable geographies and what he saw as a lack of adjustment in its strategic plan. He argued that HomeStreet should do more to minimize its mortgage unit and restructure its commercial operation to close underperforming branches, reduce its headcount, and realign employee incentives.

"You've got a bank that has performed poorly over the last five years and has made some very poor decisions strategically," he said. "If they're willing to make changes to the board and to the strategy and be held accountable to those, I think the stock is going to appreciate significantly."

The bank said it welcomes shareholders' feedback and that it is currently executing a plan to expand commercial and consumer banking business and optimize its mortgage banking and servicing unit. The company said in a statement that the mortgage business is "clearly" cyclical and seasonal but that it is an important business line that generates significant earnings. The statement also said that Blue Lion had been a supporter of the bank's strategy until its November 2017 letter. 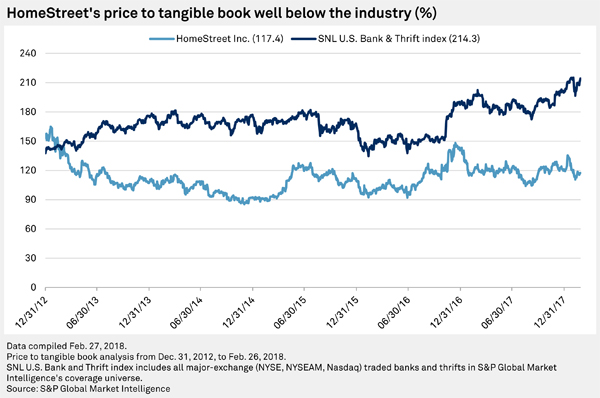 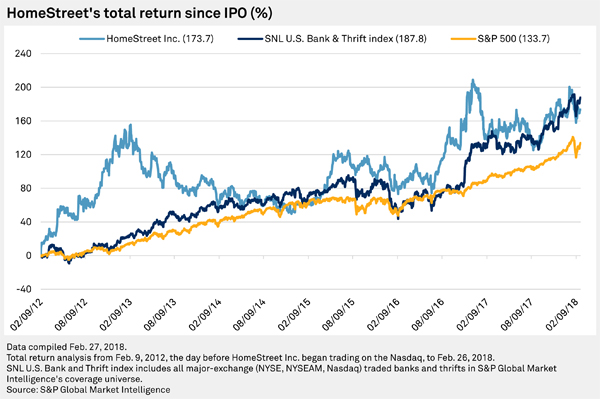 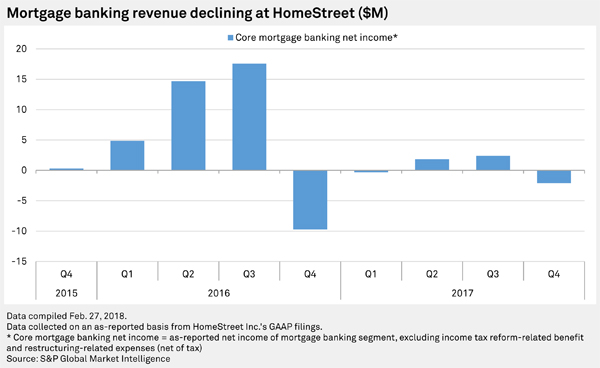 HomeStreet's stock is one of the cheapest in the U.S. bank space and has consistently traded below the U.S. banking industry, according to S&P Global Market Intelligence data. At 117.8%, HomeStreet had the eighth-lowest price to adjusted tangible book value among public U.S. banks and thrifts with at least $1 billion in assets that are listed on a major exchange as of Feb. 26. On the basis of price to last-12-months earnings per share, it is the fifth cheapest.

That low valuation could be in part due to the quality of earnings investors tend to assign mortgage banking earnings. For years, HomeStreet's earnings benefited from its outsized mortgage bank in a low interest rate environment. In recent quarters, however, the unit has dragged on earnings because of tight inventory on the West Coast and rising interest rates, and executives have taken some steps to reduce its capacity, costs and management within the business.

Core mortgage banking net income has declined at the bank, falling from a recent high of more than $17 million in the third quarter of 2016 to negative territory during two quarters in 2017. FIG Partners analyst Timothy Coffey said that mortgage banking has represented 57% of the bank's revenues over the last four quarters and 66% of its expenses.

One aspect of the dispute is what period of time should be used to measure the bank's performance. Griege said the bank had increased total return by 16% during a recent five-year period. HomeStreet preferred to use its slightly dilutive initial public offering date that occurred six years ago.

The additional year makes a significant difference when measuring the bank's total return. In 2012 to 2013, mortgage banking made up the majority of the bank's earnings, advancing the share price. S&P Global Market Intelligence data shows that the stock has a total return of 173.7% since its IPO, compared to the SNL Bank and Thrift index's return of 187.8%.

The impending proxy fight for broad representation comes after Blue Lion's initial request for a seat was rebuffed. Griege offered to join the board in his November 2017 letter and was interviewed by the full board and the governance and nominating committee in early January. Afterward, HomeStreet rejected the request, deciding that he did not bring new or additional experience and that it was "not in the best interest of all shareholders."

But Griege pointed out that his firm's 5.5% stake is larger than all of the bank's directors, although much of that buying activity occurred between late September 2017 and mid-November 2017. The board did recently add a "substantial" outside shareholder with the January appointment of Mark Patterson, whose Form 3 indicates his family trust beneficially owns 90,000 shares of HomeStreet as of Jan. 25.

S&P Global Market Intelligence data shows that total insider ownership at HomeStreet was 3.0% based on available information; the median for public U.S. banks and thrifts with at least $1 billion in total assets that trade on a major exchange was 7.9%. Even though management's long-term incentive plan pays out restricted stock and directors receive a minimum of half of their retainer in stock, CFO Mark Ruh owns 2,316 shares as of Feb. 1, while lead director Scott Boggs owns 18,971 shares as of Jan. 25. Ruh joined the bank in January 2017 and has served as CFO on an interim basis since April and permanently since September.

But the way some outsiders see it, the dispute focuses on timing and approaches, rather than overall vision. Coffey pointed out that HomeStreet management knows that commercial banking will need to be an important part of its overall business model, but its transition timeline is slower than Blue Lion would prefer.

"They're both pointing to some place in the future, and they're pointing to the exact same place," he said. "They just have different paths and timelines to get there."

The success of Blue Lion's campaign may come down to the makeup of the bank's ownership, according to an attorney familiar with activist campaigns. The attorney said HomeStreet may have an uphill battle given that 87% of the shares are owned by traditional investment managers, according to S&P Global Market Intelligence data. Institutional holders focused on maximizing their investments may see little harm in appointing another outsider onto the board, and Patterson's 90,000 shares may not persuade them that a large-enough shareholder is represented, the attorney said.

This article originally appeared on S&P Global Market Intelligence’s website on March 1, 2018, under the title, "Activist, HomeStreet square off over business model, board seats"