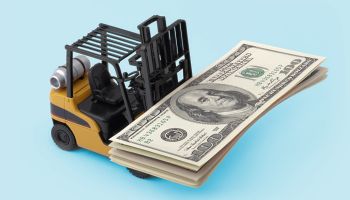 Some banks have entertained the possibility of modestly increasing CD balances to lock in lower-cost funding for set periods of time. But not everyone is sold on the strategy yet.

Banks have been successful in that strategy. And many are still holding strong with their efforts to keep CDs to a relatively small percentage of their deposit bases.

However, debate seems to be emerging about whether or not it makes sense to build CDs now to maintain some level of lower-cost funding in the event rates rise in the not-too-distant future.

Where the numbers stand

Some observers argue that CDs could help banks manage interest rate risk. As it stands today, many banks could find themselves in an asset/liability mismatch if rates rose materially.

Karl Nelson, president and CEO of KPN Consulting, noted at the ALM Financial Forum on Sept. 23 that many banks' asset bases will reprice in three to four years, while the weighted average life of their deposits is probably just six months. If rates rose notably, banks could see their margins squeezed as funding costs rise much more quickly than asset yields.

Most banks have lowered their funding costs as they have taken advantage of the tremendous deposit growth that has occurred since the credit crisis. Deposits have grown roughly 47% since year-end 2006, while loans have grown just 12%, SNL data show. But, there is concern that the composition and cost of those deposits will at least change and some deposits could even run off when interest rates rise. 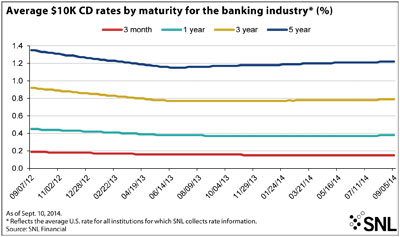 Banks could possibly mitigate that impact by layering on fixed-rate funding either through FHLB borrowings or by increasing their CD balances. Some banks have already selectively looked to build their CD balance sheet.

• Stuart Lubow, chairman, president, and CEO at Community National Bank, said at the FIG Partners CEO Forum on Sept. 16 that his company has gone into the market and attracted some longer-term time deposits to hedge against rising rates. He said the company feels prepared and is comfortable with where it stands in a rising rate environment.

• Westfield Financial Inc. CFO Leo Sagan Jr. said at the FIG Partners conference that his company has also worked to put customers into longer-term CDs. However, he said Westfield has encouraged customers to "ladder" out their funds into a variety of CDs with different maturities.

If interest rates move materially higher, the company is worried that customers will withdraw funds early because the penalty they incur will not be punitive enough to stop them from taking funds to a competitor offering far higher rates. If a CD is going to mature in nine months, though, the customer will be more likely to keep their funds steady and wait to roll them over into another product once the maturity occurs, he said.

• Oritani Financial Corp. CFO John Fields Jr. said at the FIG Partners event that his company has looked to extend the duration of its CD customers as well and match the duration of those products to its loan portfolios. However, he said Oritani finds it easier to achieve that rate positioning by borrowing from the FHLB. 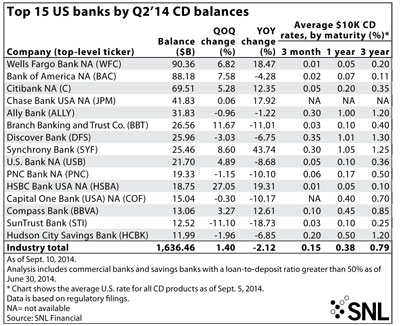 BofA had the second-largest CD balance of any bank at the end of the second quarter, but the relative size of CDs on the Charlotte, N.C.-based bank's balance sheet is small. BofA and its competitor Wells Fargo & Co. find themselves at the top of the list of banks with the largest CD balances, but those institutions have two of the largest deposit bases of any bank in the U.S.

Not surprisingly, the nation's biggest banks made up the majority of the list of the top 15 banks by CD balances at the end of the second quarter, but a handful of smaller institutions without traditional retail branch networks, such as the banking units of Ally Financial Inc., Discover Financial Services, and Synchrony Financial, also reported large CD balances at the end of the period