Unbanked households are often imagined to live in urban neighborhoods devoid of banks, but is that really the case? Our map of U.S. banking deserts reveals that most are not in urban areas, where financial exclusion may be endemic, but in actual deserts—largely in the sparsely populated, rural West. Across states, we find that the share of the population in a banking desert is unrelated to the share that is unbanked. If distance from a bank is not what causes financial exclusion, then motivating banks to locate closer to the unbanked may not promote financial inclusion.

As in our previous post, we define a banking desert as a census tract (roughly a neighborhood) that has no bank branches within it or within ten miles of its center (technically, its centroid).

Below we map all 75,057 tracts covered in the 2010 census, with the 1,214 banking desert tracts shaded red. Commentary on banking deserts often paints a picture of neglected urban landscapes and communities abandoned by banks. In fact, most banking deserts are in very sparsely populated areas in the West; most of Arizona, northern Nevada, and southwestern California, which are actual deserts (or semi-arid regions), are also banking deserts. Mississippi, Arkansas, and Maine have a few deserts, but there are almost none in the Northeast or the Midwest. Overall, just 23 percent of banking deserts are in Metropolitan Statistical Areas (MSAs), with the rest in rural areas. New York City, the largest MSA in the country, has no banking deserts, nor do its neighboring MSAs, Boston and Philadelphia.

The relative paucity of urban deserts supports the finding in our earlier post that residents of majority-minority census tracts, which tend to be urban, are less likely to live in a banking desert than residents of other tracts. Although that result seems sensible (since urban areas are better able to support a bank branch), it might depend partly on how banking deserts are defined (see this study). 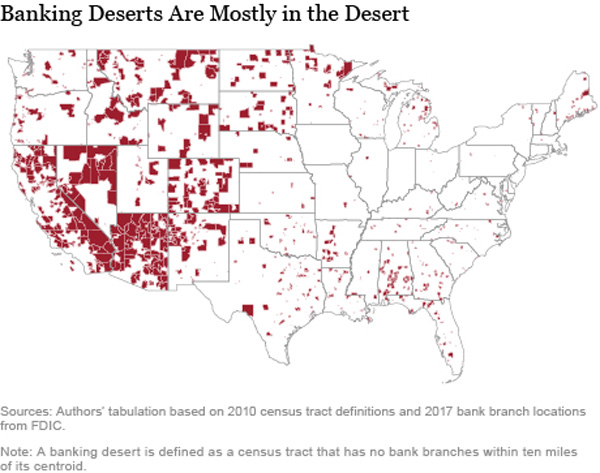 The latest (2015) FDIC survey on financial inclusion estimated that 7 percent of U.S. households—nine million—were unbanked (no bank or credit union account). The table below reports the share of each state’s population that is unbanked, according to the FDIC survey, along with the share living in a banking desert. The two measures do not necessarily move together; the share of Washington, D.C., residents living in a banking desert is zero, yet its unbanked share is almost 11 percent. Likewise, Louisiana has the highest unbanked share in the United States, almost one in seven residents, but the share of Louisianans living in a banking desert is very small. Across all states, the correlation between the two (-0.26) is not statistically different from zero at the 95 percent confidence level. 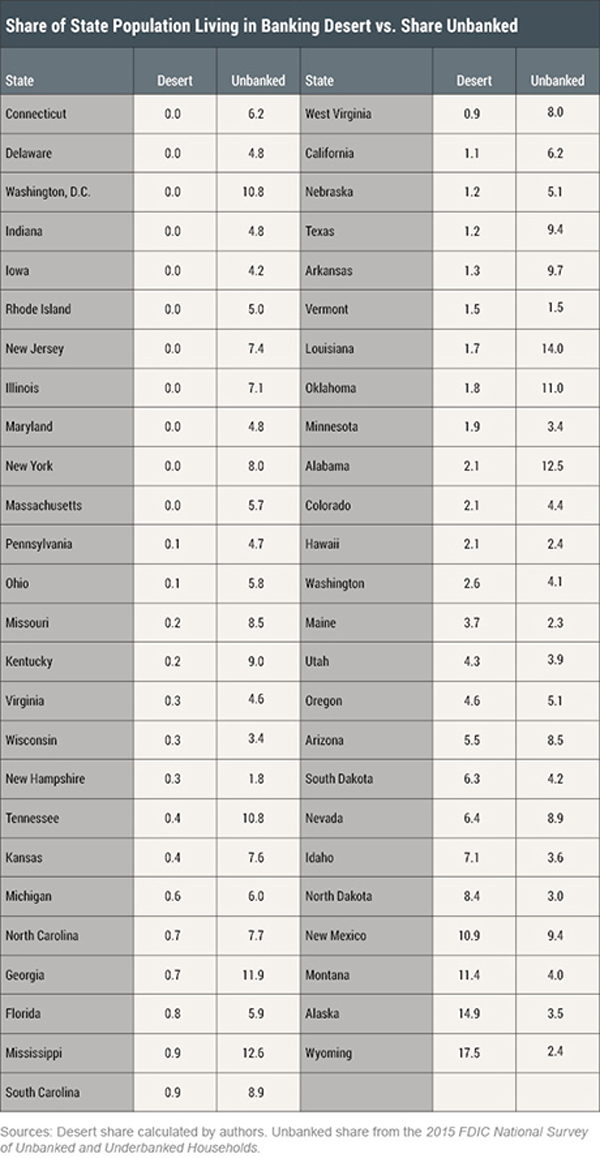 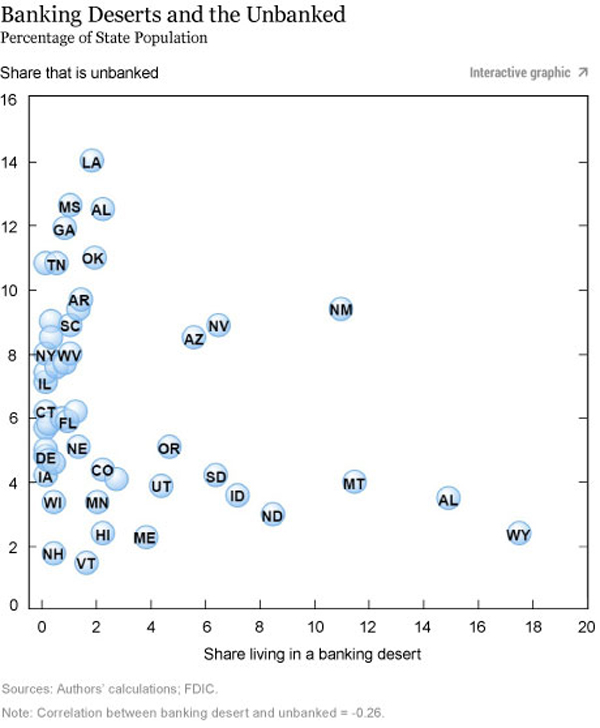 “Banking desert” is an evocative term, but our findings make us wonder if it’s a distraction. Most banking deserts are literally in deserts, where few people live, and states with a higher share of bank desert dwellers don’t have more unbanked households.

On the policy front, physical distance from a bank seems not to be what keeps the unbanked away, and so motivating or compelling banks to open branches near the unbanked may not reduce their numbers. In fact, in the FDIC’s 2015 survey, only 2 percent of unbanked respondents cited “inconvenient location” as the main reason why they did not have a bank account. Far more important reasons were “not enough money to keep in account,” “don’t trust banks,” and “account fees too high.” Those issues merit more attention than banking deserts.

Donald P. Morgan is an assistant vice president in the Federal Reserve Bank of New York’s Research and Statistics Group.

Maxim Pinkovskiy is a senior economist in the Bank’s Research and Statistics Group.

Davy Perlman is a senior research analyst in the Bank’s Research and Statistics Group.

More in this category: « Bringing today and tomorrow together in 2018 Same-day ACH is a gift. Use it »
back to top