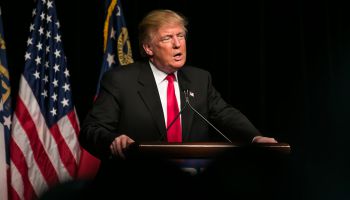 This may be positive…

To make sure I was not missing some part of the President’s speech last night, I used the search application in my computer to see if the President mentioned the two “dirty” words (“bank” or “finance”) in his speech last evening. He never mentioned either one. Moreover, he only used the word “deregulation” once in a non-financial context.

Since one of the reasons that bank stocks are doing so well is due to an expectation that the industry will experience some ease in regulation, the question arises as to whether this failure to mention the industry is good or bad.

Quite frankly, I think it is good for the industry and the stocks.

My reading of the two bills presented by Republicans in Congress is that they are misguided and more harmful than positive for the banking and financial industries.

• Senator Shelby’s (R.—Ala.) bill introduced in the last session of Congress was politically driven with no real interest in resolving any banking issue of importance.

The thrust of this bill was to revive the concepts of the disastrous Garn-St Germain legislation of 1982. Both the Shelby and Garn-St Germain approaches sought to use big government to aid small depository institutions. Both bills attempt to ignore economic reality in the belief that government can control the direction of the private sector.

• The Hensarling (R.—Texas) Financial CHOICE bill revolves around the concept of forcing banks to have 10% capital-to-asset ratios in order to eliminate regulation.

Both sides of this equation are flawed. Banks with 10% capital ratios have failed, contrary to Mr. Hensarling’s statements. Moreover, it is not spelled out as to what regulations that the banks can ignore.

The key problem with both of these bills is that they ignore consumer preferences.

Big banks get more business than small banks because consumers prefer to do business with the big banks. If they did not, small banks would thrive.

These supposed conservative Republicans are writing legislation which tells consumers that they should do business with companies that the consumers do not want to work with. Truly unbelievable.

The fact that the President ignored them last night is a plus, not a minus. Without his support they are not likely to become law.

What the President seems to realize is that in the real world, it is not the laws but the interpretation of the laws that counts.

Simply stated, by changing the myriad rules that were spawned by Dodd-Frank more can be accomplished than by waging a major public battle to eliminate Dodd-Frank.

Changing the capital ratios or the liquidity ratios or dumping arcane stuff like the Total Loss Absorbing Capital (TLAC) rules does not require any action by Congress.

The long-departed German sociologist Max Weber indicated 100 years ago that one can control the government by controlling the bureaucracy. The new nominee to the Supreme Court, Neil Gorsuch, is keenly aware of this. Controlling rulemaking based on assumptions by the bureaucracy is one of his key missions.

President Trump’s economic advisors are also aware of this. They know that by stacking the Fed, putting in place new heads of the FHA, FDIC, FSOC, OCC, SEC, and so forth, they can make all of the changes necessary to ease banking regulation without stirring up populist ire.

All indications are that this is being done.

The key points for banks in this speech were two-fold:

Richard Bove is a veteran bank stock analyst and the author of Guardians of Prosperity: Why America Needs Big Banks (2013). He is vice-president, equity research, at Rafferty Capital Markets, LLC. For more information about his weekly newsletter, Bove's Weekly Financial Comment, email Bove at [email protected]

More in this category: « Misunderstanding Millennials Creating a special bank brand »
back to top