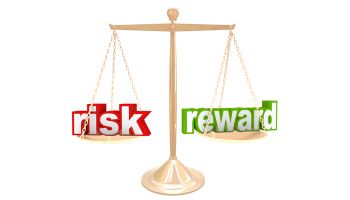 To many people, “risk” is a four-letter word to be avoided. And when tied to “executive pay,” it brings back painful memories from the runup to the Great Recession.

But it is virtually impossible to identify any company that does not have to take on some level of risk in order to be successful. What companies should avoid is risk that can lead to bankruptcy, or worst, damage an entire industry or the economy as a whole.

The Securities and Exchange Commission has recognized the importance of making sure shareholders understand the exposure that risk can impose on a company. In 2009, SEC stated that proxy statements must include a discussion of risks that are “reasonably likely to have a material adverse effect on the issuer.”

No guidance was provided on how to make such a determination, but most would agree that “risk” is the degree of uncertainty between expected and actual outcomes.

The discussion of “risk” in the proxy is also expected to relate to the compensation program. If the plans are based on high pay for success in high-risk situations, it is critical that shareholders have that information.

When designing pay-for-performance compensation plans, it is essential to put them in the context of degree of risk (or severity) and probability of occurrence. To simplify matters, each factor can be described in terms of low, moderate, and high, resulting in nine unique risk/probability combinations. But when these are applied to low, moderate, and high compensation levels, there are now 27 possible risk/probability combinations to consider. It is important to identify the most important combinations.

Severe outcomes, such as those that can bankrupt a company or paralyze the economy, regardless of its probability, should not be incentivized.

The worst combination for disaster and excessive pay is “high” probability of severe risk incentivized with “high” pay (noted in the chart as #27).

On the other hand, “High” probability of a “low” risk situation with a “high” pay outcome (noted as #21) is a prime example of a poorly designed pay plan resulting in excessive pay.

The ideal combination for incentive plans is “moderate” for all three—risk, probability, and pay level (noted as #14).

Overlay with type of plans

Clearly, the most dangerous situations are combinations of “high” risk with “high” probability of outcome, although “low” and “moderate” probability can also be hazardous situations and must be carefully evaluated when designing incentive pay plans.

Additionally, companies who offer incentive plans with little or no risk are almost certainly offering their executives excessive salaries. These points are illustrated below: 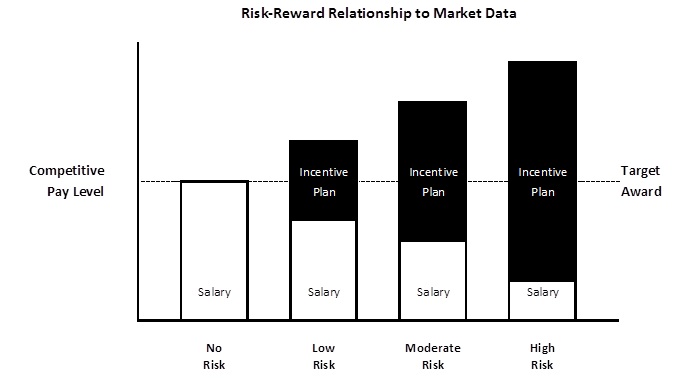 Reputation risk is a genuine factor companies must weigh. And more than ever before, it is critical that companies be sensitive to the issue of “excessive” compensation.

But that leads to the question: Who considers pay excessive?

Is it the IRS, who determines if payments are allowable as tax deductions to the company?

Or possibly the shareholder advisory services, who vote for or against binding and nonbinding resolutions?

Or perhaps it’s the media?

Or the shareholders themselves?

Even more controversial than excessive pay is excessive pay with irresponsible risk. Special care must be taken to ensure the metrics used in incentive plans are consistent with the risks taken and the desired outcome. Companies must carefully consider the material adverse effect of any planned outcomes as they may be asked by SEC to quantify the risk profile.

Organizations would do well to look to their own situation and construct the most appropriate pay package given an assessment of probability and severity of risks.

This was a painful lesson learned by Washington Mutual, which collapsed as a result of the mortgage lending crisis, becoming the largest bank failure in U.S. history. Many arguments could be made regarding the likely alternative outcomes had mortgage lenders there had an incentive plan that encouraged them to reject inappropriate loans, rather than simply rewarding those producing such mortgages.

SEC’s requirements, along with the financial problems of those involved in the subprime mortgage debacle, are expected to have a moderating effect on large pay packages based on high risk. Time will tell.

Bank regulators—who have been increasingly involved in executive and incentive compensation—will be well advised to carefully consider risk-based pay for performance in their reviews.

Bruce R. Ellig is a noted authority on executive compensation with more than 35 years of experience, and author of the recently released third edition of The Complete Guide to Executive Compensation. Before retirement, he was corporate vice-president and head of worldwide HR at Pfizer Inc. and served as secretary to the board’s compensation committee, and member of the internal compensation committee, headed by the chairman and CEO. Ellig has served on several boards, including as chairman of the national board of directors of The Society for Human Resource Management.

More in this category: « Compliance challenges—why go it alone? Spelling out what today’s bank leader must be »
back to top