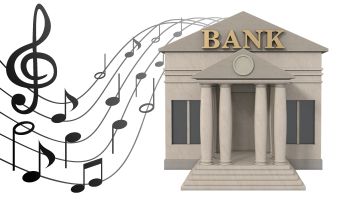 Some stray facts reached me the other day, about JPMorganChase. One was that the “Chase” in the name comes from Salmon Chase, President Lincoln’s Treasury secretary. Another is that the pistols used in the famous duel between Aaron Burr and Alexander Hamilton still belong to the bank.

But most interestingly, I learned that the classic “Jingle Bells” we’ve all heard about 100 times by this point in the season was written by James Pierpont, uncle of J. Pierpont Morgan, the financier *.

Which makes a handy introduction to a blog about banks’ own jingles, a species that may have gone away in the traditional sense, as much as have one-horse sleighs. True, we still have plenty of bank slogans and taglines, but the musical jingle with words seems nearly extinct, at least in the New York tri-state area where I live.

(If this art form remains healthy where you are, share some current jingles in the comment section below. And if my memory has erred on the ones you’ll read below, please tell me so. Notoriously I first heard Sting’s “Message In A Bottle” as “Mrs. Jenny Bartoo.”)

Today, when banks use music in their commercials, it’s usually something fairly stylized, such as the instrumental, upbeat tones of PNC, or licensed versions of popular songs. One example of the latter is Chase Bank’s use of “Under Control,” by Tim Myers, using the lines, “Keep on keepin’ on.”

Ghosts of jingles past

Since we were small, my brother and I “did commercials” with each other. We’d recite them from memory, complete with sound effects. An offshoot was remembering bank jingles.

Growing up in the New York area—home to Madison Avenue, some of the nation’s largest commercial banks, and, back in the day, of many mutual savings banks, I heard lots of catchy jingles, slogans, taglines, and such on local tv. (My family will tell you that I have a talent for retaining endless amounts of useless trivia. So these catchy rhymes and sayings stick like Epoxy.)

This was the mantra of the bank in its days under the visionary, legendary Walter Wriston. Later, at least one rival would market against the megabank by claiming that it had “caught the Citi napping.”

The sung slogan heralded both one of the first networks of 24-hour ATMs in the tri-state area, and also the international branch network that was Citi. In its own way, it was like the British Empire, upon which the sun proverbially never set, so far flung it was.

Marine Midland Bank, long ago merged, had a variety of jingles, which all ended in the sung refrain:

The original expression, “Tell it to the Marines,” began as a jibe at leathernecks’ intelligence, the implication being that sailors wouldn’t fall for what marines swallow. When World War II broke out, the saying flipped its meaning, coming to stand for, if you had a tough job to be done, give it to the marines.

Chemical Bank, which acquired Chase, took its name, and eventually wound up as JP Morgan Chase, used to have this closer to commercials:

“ ‘Yes’ is a Chemical reaction.

‘Yes’ makes all the difference in the world.”

For its own part, Chase had a spoken slogan for years:

“You’ve got a friend at Chase.”

But, going by memory here, the mutual savings banks of the New York area really seemed to love jingles. All I can figure is that their roots had been in consumer services and mortgage lending,  and that longer jingles were thought to hook into people’s minds.

One that stuck out for years came from The Bowery Savings Bank. As a kid, I had trouble equating savings with the bums that even a suburban kid knew lived in the Bowery, at one time a disreputable part of Manhattan **:

“Oh, it pays to save at the Bowery,

Saving is more than wise,

Save at the Bowery Savings Bank.”

Of course, the word “bowery” actually had nothing to do with bums. It came from a Dutch word for “farm,” which that part of Manhattan was, once upon a time. And of course the Dutch owned Manhattan before the British.

Years later, the Bowery did a series of tv commercials focusing on real people, common working-class New Yorkers, and how they lived and how Bowery—“The Bowery” in the way older New Yorkers made an honorific of the word “the”—touched their lives.

The commercials always ended in a new version of the savings bank’s song:

The Bowery pays a lot!

While most other New York banks simply do notttt!”

The last line would come out rather breathlessly, thanks to the stretch for the rhyme. (Today 6% on savings would be something to sing about.)

Dime Savings Bank of New York had the savings-friendly jingle:

“The road to riches [magical tinkling sounds, like Tinker Bell]

Starts at the Dime”

Musical marketing really seemed to fit thrifts. The Greenwich Savings Bank, pronounced “Green-witch,” must have run into people in Manhattan who thought its name was pronounced “Gren-itch,” like the nearby Connecticut suburb. The bank acceded to both pronunciations with this jingle:

But no matter what you do,

Save your money at the savings bank

that does the most for you!”

Later, when this bank adopted the concept of a woman greeter-advisor wearing a green blazer, it was publicized with:

for the Lady in Green.

She always enjoys helping them

out with their money plans”

Smart women dealing with money had their place in bank jingles then. Another institution used the old folk song “Reuben and Rachel” this way:

How the dollar bill’s been shrinking,

Make your money go much farther,

Save at the Lincoln Savings Bank.”

The shortest, most bizarre jingle of all

One Dry Dock commercial featured what passed for late 1960s-early 1970s hipsters riding a multi-rider bicycle touring Manhattan neighborhoods with Dry Dock branches. The final rider, a goateed, balding beatnik sort, always seemed to be malingering, such as sipping an ice cream soda on the bike’s last seat while the others pedaled.

As the group passed through each scene, a woman singer, with an ethereal voice, would say only:

“Dry Dock Country” looked like an interesting place to live, but the bank connection was kind of vague. Come to think of it, “Dry Dock” was an odd name for a bank, to modern ears.

Many mutuals had nautical names because they were founded by sailors’ aid societies. The idea was to help seamen to put by something from their toil for their old age, instead of continually spending it all on booze and other shore pursuits. But to be “put in dry dock” usually means to be idled for repairs. Perhaps in this context “safe harbor” was meant to be implied, long term. ***

Today the area is called “Alphabet City,” for its letter-named short avenues.

In later commercials with classic musical star Jane Powell, Dry Dock kept up the focus on New York neighborhoods and stuck to the designation “Dry Dock Country.” (Actually, I don’t recall her singing, curiously.) Later the bank merged with a Bronx institution, Dollar, to form Dollar Dry Dock, but that combination failed and was absorbed by Emigrant Savings.

Jingles from the outer boroughs and beyond

Manhattan didn’t have a monopoly on bank jingles, of course.

To the north, People’s Westchester Savings, also merged away, finished commercials with:

“Your answer to financial need?

Independence Savings Bank, which began in Brooklyn, and crossed the East River to Manhattan and New York Bay to Staten Island, had this almost defiant jingle:

Independence is a way of living!”

Googling around the internet, you don’t find nearly the attention paid to bank jingles, even on marketing websites. On Youtube, most of what’s there comes from overseas, and is in languages other than English.  There was one vintage commercial that recalled a savings bank jingle I had forgotten, from Astoria Federal, which still exists:

“What’s the big idea? (urgent tone, on the sly)

The big idea is the Astoria idea!

An idea designed to come through,

With many happy returns for you!

(Word about the latest rate offer)

Farewell to the jingle

The big idea about jingles seems to have fizzled.

As we bid farewell to another holiday season, we might as well bid farewell, officially, to the bank jingle. You can still find websites for specialized jingle shops that say they can write them for banks as well as other kinds of companies.

But maybe they just don’t have the relevance they once did, not in an age of Twitter and Facebook. Jingles seemed biggest before cable and the explosion of televised entertainment choices, when more of us tended to share a common set of viewing or listening experiences.

Years ago, I attended a bank marketing conference where a Nabsico executive gave a speech called something like “four little notes.” He captivated the audience for a good 20 minutes with the story of how the signature commercial closing chorus of “NA—BIS—CO!” served for years, but was updated.

The update? A “ding” on a percussionist’s triangle as a fourth tone, “NA—BIS—CO—ding.”

Today I doubt anyone would have heard him out. They’d be too busy checking email and tweeting.

A jingle unheard can’t be remembered.

* The uncle had his share of financial difficulties. He had tried to capitalize on the California gold rush but the store he started burned down, and he went broke. He returned to the East and wrote a song about his experiences, called “The Returned Californian.” It included this verse about his outstanding debts, certain to not warm the heart of bankers:

"Oh, I'm going far away from my Creditors just now,

I ain't the tin to pay 'em and they're kicking up a row;

I ain't one of those lucky ones that works for 'Uncle Sam,'

** I have to bow to fellow blogger John Byrne, here. John frequently uses pop song references as titles to his blogs, and he recently used one from Jim Croce,”Movin’ Ahead So Life Don’t Pass Me By.” Croce’s tune “You Don’t Mess Around With Jim,” includes the lines:

“Uptown got it's hustlers,

The Bowery got it's bums

*** But actually, historically, the name came from the Dry Dock neighborhood of Manhattan. There, wooden ships were dry-docked for repair—and that’s where the savings bank started, having bought the rights to that name from the New York Dry Dock Company, which had a special state charter to do many things, including banking. (All this according to “Off the Grid,” the blog of the Greenwich Village Historical Society.)

More in this category: « Does your bank still have the right board? It's not just about "tone at the top" »
back to top