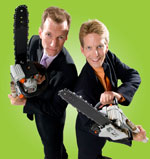 Would you pay to see a juggling act?

Probably not unless it was the warm-up act for a Beyonce concert.

If you were a juggler instead of a banker, that would be a problem.

But you, as a banker, can learn some important lessons from jugglers.

Business with ups and downs

Juggling is not exactly a popular form of entertainment these days. Popular appeal probably peaked around the time of Richard the Lionheart.

Despite their technical wizardry, which has earned them several Guinness records, the two men freely admit that to most people juggling is a yawner. Yet the act is highly successful. They've played the White House (last year), done a royal performance in England, been a finalist act in the inaugural season of NBC's "America's Got Talent" (losing a million dollars to an 11-year-old girl, as they point out on their website), and countless corporate events.

In February they opened the second day of Deluxe Corporation's Expo 2013 conference. Juggling in front of 300 bankers at 8:30 in the morning is not exactly an easy gig. But The Passing Zone was a hit and set up the day's events by incorporating several conference themes into their act.

In an interesting twist, the pair hung around all day and came back on stage to be interviewed at the end of the day as a coda to the program's focus on what banks need to do to get customers to buy more from them and buy more often.

Keeping your act fresh--on stage, in the bank

A Deluxe executive interviewed Morse and Wee, and asked how they overcame people's lukewarm attitude to juggling. Morse responded that people think they know what to expect from a couple of jugglers, "and it's our job to give them something different."

And they do. They have created a mix of rapid-fire comedy with difficult, unusual, and (perceived) dangerous feats of juggling.

"We have to constantly work to keep the act fresh," said Wee, always playing off the audience's reaction (or lack of it), and even to the inevitable "oops" moments when they drop something. (Fortunately they only dropped a club in attempting to set a new world record, during their act, not a machete!)

"We don't even like to use the word ‘jugglers' to describe the act," Morse added. "It's not the most popular word--just like ‘banking'."

That caused a ripple of comments from the audience.

Hearing that he said, "Really, banking is not the most popular profession right now."

It's interesting what you can learn from unexpected sources. Banking's unpopularity--in general--is hardly news to anyone in the industry, but there are several important points that come out of these innocuous-seeming comments.

• One is the importance of remembering your public.

Entertainers live and die by audience reaction, so they are particularly attuned to it. But in reality every business is an "act," and must please its audience or it will not survive. Staying fresh from a bank's point of view can involve many things--products, branch appearance, and always the attitude of the people working there.

• Another essential is to change directions from time to time as the nature of business dictates.

The Passing Zone, for example, shifted along the way from appearing primarily at entertainment venues to doing corporate events.

And as the two performers also noted, their act requires constant practice to keep the timing sharp and to try out new stunts.

Can you be a better banker?

In business, of course, the practice comes every day in the doing versus a rehearsal.

But what if every employee could have the attitude of, "How can I do this task better, or my job, better?"

The results would easily be as impressive as two jugglers managing to keep their act fresh and prospering for more than 25 years.

More in this category: « Use CFPB's complaint database to retain customers How reputation risk impacts your bank »
back to top