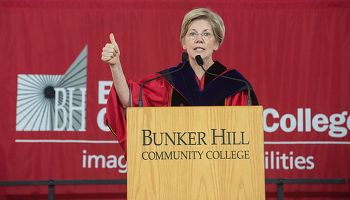 A banker talking politics with me recently said the problem with our system is a government that caters to special interests. I couldn’t help thinking that today, who isn’t part of some special interest? Lack of national cohesion has driven everyone to their chosen political lightning rod. And nearly even lightning rod seems to also be a wedge. One voter’s champion is another voter’s villain. Not new, but moreso than ever today.

So it really says something when someone is able to dominate a room when they’re nowhere near it. Sen. Elizabeth Warren unconsciously demonstrated that this week during the Government Relations Summit of the American Bankers Association.

As is typical of such events, ABA had gathered members of the House and Senate financial services committees to talk about developments and outlook. The session title, “The Changing Political Landscape and How Bankers Must Adapt,” turned out to be a bit prophetic.

After 37 years covering banking, many such panels have proven eminently forgettable. This one wasn’t.

Moderator Ben White, chief economic correspondent and columnist at Politico, began with a question about the rise of Donald Trump. Trump is a figure that tends to dominate any political conversation today, and the panelists dug in.

Sen. Heidi Heitkamp (D.-ND) said Trump was riding a wave of dissatisfaction and unhappiness over a slow recovery. Many, she said, have not kept up with the recovery and feel left behind. They feel that others, such as big banks, got bailed out and they didn’t, and they think it is time for a reckoning, she said.

“He was saying exactly what they thought,” she said.

She said Congress is seen as uninvolved in issues important to many people, and incapable of action outside of party political interests. Disgust with this state of affairs is driving people to Trump, she said—and she painted both parties as responsible.

From this beginning, the nature of the discussion changed when Rep. Blaine Luetkemeyer (R.-Mo.) was turned to for his view on the Trump phenomenon and the election in general. Moderator White asked how bankers could address anger in the electorate.

Luetkemeyer, a former banker, allowed that his own preference for the nomination had dropped out and said he would support his party’s nominee. But then he began to comment more generally.

He opposed a Clinton presidency. “If we get Hillary Clinton, we just get Barack Obama 2.0,” he said. A Sanders presidency, he said, would take the country even further to the left—also not good, in his view.

Luetkemeyer spoke of a need for “fresh air” in Washington, and targeted the Senate.

“I think we need to neuter Senator Warren. She is the Darth Vader of the financial services world,” said the Missouri Republican. The room erupted with banker applause—and thus began the predictable furor in the social media-blogosphere.

(One wonders if a slightly different choice of words, say, “neutralized,” would have elicited the same response. Warren sent a message to supporters saying she wouldn’t be neutered and that she always identified more with Princess Leia. She also noted he’d made the statement to a roomful of Wall Street bankers. My own eyeball survey of the crowd denied that. The vast majority of people in the room were community bankers, many of whom I know by name or sight.)

But back to what actually happened …

Luetkemeyer explained that the way to do what he’d suggested was to elect a Republican president. Currently, he said, Senate Banking Committee Democrats fear voting against the views of President Obama and against Senator Warren’s positions. Warren, effectively the mother of the Consumer Financial Protection Bureau and a notable critic of the largest banks, has not been a friend to the banking industry.

Luetkemeyer said that Washington banking policy and legislation have been killing the community banks of the country and that a turnaround depended on party change in the White House and favorable action out of Congress. He said it was essential for bankers to tell their senators and members of Congress what the current climate was doing to prevent them from serving their customers. “We want to know those stories,” Luetkemeyer said—stories about the impact of CFPB rules on service are much more effective than griping about hits to the bottom line.

“Wall Street banks were blamed for a lot of the crisis and the solution was to drag everyone else with them,” said Luetkemeyer. He is pushing legislation that would change Dodd-Frank to make institutions “SIFIs”—systemically important financial institutions—by virtue of their scope and activities, not solely by asset size.

From then on, the centerpiece of the panel discussion increasingly became Elizabeth Warren. 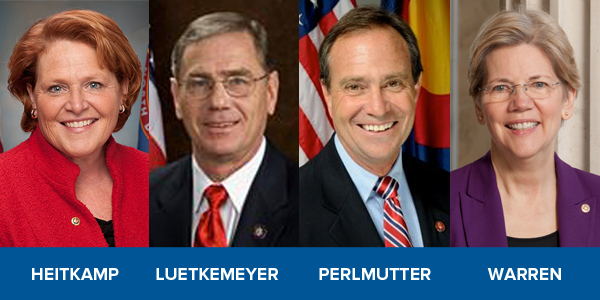 He asked how many bankers in the room had participated in a political campaign—walking a precinct with a candidate or attending a political caucus. Few raised their hands.

If a banker has done that, Perlmutter continued, he or she will have heard the level of lengering frustration about the financial crisis and the degree of public assistance given to the financial system.

“It was the right thing to do, but a lot of people are still angry about it eight years after the fact,” Perlmutter said.

Senator Heitkamp noted that Warren’s social media commentaries receive millions of “likes,” and asked how many bankers have seen such approval.

“Don’t demonize anyone,” she said. “Talk about the issues.” She said her rural communities have difficulty getting appraisals due to regulations. Talking about such challenges, “where the rubber meets the road,” gains traction for her, and, she implied, for banks.

“When you make this about Elizabeth Warren,” she said, “you are playing into the hands of those who don’t want to get anything done.”

Then the senator asked, “How many of you saw ‘The Big Short’?”

She asked those who had seen it in a theater if they’d overhead much love for bankers in the post-show chatter. People are mad, she said.

“So don’t make this about personalities,” Heitkamp said. “You will lose.”

Community bankers should differentiate themselves from larger banks, she told the audience, because when they endorse improvements for large banks, they become wrapped up with a segment of the industry the public plainly dislikes.

“Dodd-Frank isn’t going anywhere,” chimed in Perlmutter. Earlier, Luetkemeyer had suggested that if even former House Financial Services Committee Chairman Barney Frank had stated that some amendments were in order, that something could be accomplished. Luetkemeyer also noted that the day before, at the summit, current Chairman Jeb Hensarling (R.-Texas) had spoken of changes he hopes to put in motion.

Perlmutter said Hensarling wants to throw out Dodd-Frank and “that ain’t going to happen.” He predicted that Democrats would regain the Senate in upcoming elections, but that anywhere community bank interests in regulatory relief could be isolated, there could be progress for them.

“I don’t know about this year, but certainly next year,” he said.

Warren back in the fray

Politico’s White commented that it seemed the days of bipartisan cooperation on financial services legislation were gone. He said it appears that “You are either on the side of Wall Street or for the people.” This led the discussion back to Senator Warren. He asked if there was a way to turn down the rhetoric and get something done.

Luetkemeyer said that this was appealing, but that Warren herself had to make an effort toward bipartisanship—“It goes both ways.” He said she has attacked him from the Senate floor over legislation he was pursuing in the House.

“She has to tone down the rhetoric,” said Luetkemeyer. “She has been very vitriol[ic]. The way she has talked about the banking industry, calling them names.”

Warren, he said, needs to stop her attacks and listen to the industry and listen to ways it has improved since the crisis. Only then can something get done, he said.

Heitkamp said, “she feels passionately about what happened and how we need to fix it.” Warren is very cautious about rolling back reforms, she said.

Then Heitkamp, clearly frustrated, said this:

“Every time you talk about her, you give her more power, because it becomes about you versus her, as opposed to how to fix the problem that we’re in. Dodd-Frank is not perfect.”

She acknowledged that improvement is required, and that there is a need to address Dodd-Frank’s unintended consequences. However, she said,  that will require putting politics aside to come together in a bipartisan way to reach compromise that will result in some action for community banks, “which everybody professes to love.”

“If everyone acted on their affection for community banks,” she added, “we wouldn’t be up on this podium.”

Perlmutter said “words matter.” Hyperbole and name calling won’t help, he said, “and drive everybody into their separate corners.”

He said much of what is going on right now on reform is speechmaking, not dealmaking. Of Chairman Hensarling, he said, “He is a smart guy, who is ideological to the nth degree, and so you end up having to put up your dukes, saying, ‘Whoa, wait a second’.”

“Words matter, they can either pull you together or drive you apart,” said Perlmutter.

“Elizabeth Warren is one vote from Massachusetts,” said Heitkamp. “She has a big megaphone, but you’ve got a big megaphone too,” she said, referring to the bankers in the audience. “You can tell people, ‘This is what I need from you to reduce costs and be able to be creative in my banking.’ I’m concerned that this regulatory environment has made you less willing to be inventive with new products.”

She said this is the case to be made for community banks that “present no systemic risk.” The alternative, she said, was to watch community banks grow less competitive. Luetkemeyer spoke of banker constituents who have shown him how increasing compliance burdens have driven up costs and staffing needs.

More in this category: « “Changepreneur’s” recipe for bank relevance Fintech, ducks, innovation, and “unintended consequences” »
back to top