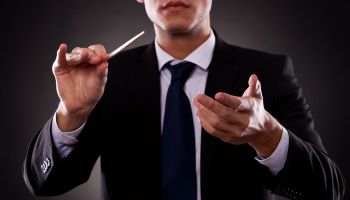 One of the key duties of a board is establishing the “tone at the top” of the bank. Tone shows up in many places, from expectations for employee behavior to the bank’s image in the community to the bank’s risk management policies. Yet experience has shown, over and over again, that setting the tone from the top isn’t the whole job—and it isn’t the whole picture.

Tone at the top can be undermined by employees who don’t toe the line and yet aren’t called to account for it. This sends messages to other employees, among them, “You don’t have to take what we expect as gospel.”

The phrase “toe the line” is an interesting one. The origin—sometimes mistakenly written as “tow the line”—goes back, in one version, to the British Navy in the days of wooden ships. When ordered to assemble, sailors were expected to line up on the wooden deck seams, as an aid to order, with their toes touching a common line with the other sailors. In the same way, in an organization that’s paying attention, bank employees must toe the line—perform as expected and behave as expected. That performance may be financial, legal, moral—even down to appearance.

A while back we were in a community bank where key managers had misbehaved, and did lose their jobs. But the succeeding leadership, who we were visiting, had to spend a good part of their early days simply undoing the damage that had been done throughout the bank.

Why? Apparently tolerated bad behavior sent a much different message to the rank-and-file than the bank’s board would have liked. In time, the new CEO and his team turned thing around. But it didn’t happen overnight.

In years past, bankers sometimes scoffed at talk of “corporate culture” as one of those touchy-feely buzz phrases dreamt up by management consultants. But more and more this is coming to be taken seriously.

Corporate culture can become invisible when a bank has nothing to compare it to—it’s just the way things are and those in the culture may not see it. However, as the consolidation of the banking industry picks up its pace, culture will come more and more to the fore because merging organizations may, and likely will, have contrasting cultures. How well they meld may determine how well the resulting larger banks perform.

Culture can affect teamwork, attitudes toward performance, and more. As boards themselves absorb directors from acquired organizations, where that occurs, they themselves can’t help but evolve. An extra dab of Tabasco livens up the recipe.

Just take something as simple as employee dress. One bank favors shirt and tie, the other goes for polo shirts or open collars. What’s the “right” choice for the merged organization?

Regulators don’t speak terribly often about such factors, caught up in the necessity of examining and enforcing on the basis of hard numbers and definite compliance or noncompliance with laws and regulations. This made two presentations at a recent meeting at the Federal Reserve Bank of New York especially interesting.

There, two high Fed officials spoke extensively about cultural issues in the course of discussing industry affairs. William Dudley, president and CEO of the New York Fed, and Daniel Tarullo, a key Federal Reserve Board governor, spoke directly about the behavior of very large institutions, for the most part. However, a good deal of what the pair had to say could be applied to any banking company. It’s instructive to review some of the points of each in relation to the rest of the industry at the event, “Reforming Culture and Behavior in the Financial Services Industry.”

“Culture exists within every firm whether it is recognized or ignored, whether it is nurtured or neglected, and whether it is embraced or disavowed,” said Dudley. “Culture reflects the prevailing attitudes and behaviors within a firm. It is how people react not only to black and white, but to all of the shades of grey. Like a gentle breeze, culture may be hard to see, but you can feel it. Culture relates to what ‘should’ I do, and not to what ‘can’ I do.” [Read his remarks, "Enhancing Financial Stability by Improving Culture in the Financial Services Industry."]

Both Dudley and Tarullo recapped many of the errors or ethical gaffes of recent years among very large banks, the kinds of stories that have dominated the news from time to time. Such doings have encouraged calls for more prosecutions of individual bankers, rather than simply fining institutions.

This recent history, on top of the flavor left in the national mouth by the financial crisis, can’t be ignored. “Unless the financial industry can rebuild the public trust, it cannot effectively perform its essential functions,” said Dudley. “For this reason alone, the industry must do much better.”

While griping about image problems brought on by a handful of mega-players goes on, most bankers and board members can only influence their own organizations. And that local image often is better. But that’s only one major misstep away from damage.

So some issues brought up by Dudley affect all banks. Among them:

1. Maintain the quality of your “barrel.”

Both Fed speakers spoke of the viewpoint that many of the bad headlines arose from the actions of “a few bad apples.” However, they pointed out that the barrel—the tone really set in an organization—hinges on leadership.

Where culture needs improving, “boards of directors have a critical role to play in setting the tone and holding senior leaders accountable for delivering sustainable change,” said Dudley. “A healthy culture must be carefully nurtured for it to have any chance of becoming self-sustaining.”

2. A core element of any firm’s mission and culture must be a respect for the law.

Tone must be married to accountability here. “To maintain such a culture,” said Dudley, “senior leaders must promote effective self-policing. If Audit uncovers an instance of fraud in one unit, the firm’s leadership should ask, ‘Where else could this behavior occur?’”

Dudley urged not only looking further inwardly, but taking a close look inside to see if bad behavior that becomes public in other companies has any roost in the bank.

And he suggested speed counts: “When fraud is detected, boards and senior leaders must ensure that they are informed promptly, and that a thorough inquiry is undertaken at once.”

3. Employees must feel able to bring up the uncomfortable.

Dudley said that a bank’s own employees “are its best monitors.” However, he added that that works only if they are confident that they will be heard.

A key role of a board is setting the bank’s “risk appetite.” But pay programs can undermine this when a hungry wallet overcomes judgment.

“I believe that in order to improve financial stability and rebuild the public trust, more compensation in finance needs to be deferred and for longer periods,” said Dudley. He favors holding some compensation as a “performance bond.”

Fed’s Tarullo on tone and compliance

Governor Tarullo titled his speech “Good Compliance, Not Mere Compliance.” He concentrated less on culture, because it can be hard to measure, and more on actual behavior, which regulators can observe, examine, and in some case, punish.

Tarullo acknowledged how the interaction of “tone” and action can depend on multiple factors.

“For a private, profit-making corporation the most important internal choices are obviously made by management under the oversight of the board of directors,’ Tarullo said. “However, the revealed preferences  and choices of employees will also affect a firm’s culture. For a financial institution, external influences and constraints include shareholders and market analysts, regulators, prosecutors, elected officials, the media, and the public. Market conditions and the actions of competitors can also be significant.”

Tarullo spoke both of the importance of risk management and compliance.

Regarding the first, he pointed out that financial performance often relies on risk management, and that there are those banks that merely work towards the letter of what regulators expect. By contrast, there are others that look at the spirit of the expectations. They take missteps as an opportunity for course corrections.

“In these firms the dialogue can be quite different,” said the regulator, “with supervisors observing that, even as a specific problem is addressed, such as deficiencies in estimating losses for a particular loan portfolio in a tail event, the firm has gone back to think about how the identified shortcomings fit into their overall risk decision-making and management process.”

Regarding compliance, Tarullo likewise drew a line between the form of compliance and a real desire to comply: “Are compliance programs put in place by risk managers or general counsels understood as a kind of background noise that should not drown out the voices urging employees to ‘make their numbers,’ or are they seen as reflecting the views and priorities of senior management?”

Tarullo spoke of the relative difficulty for regulators to enforce powers they already have, such as the ability to ban someone from banking. But he also suggested some consideration for the rewards and punishments that employees see in their banks: “Assuming they are able to discern factors that generally explain patterns of hiring, raises, promotions, demotions, and dismissals, employees receive very strong signals as to what those running the organization actually value. This set of signals has, I suspect, considerably more influence on employee behavior than a corporate statement of values or purposes, particularly if the system of rewards and punishments appears at odds with that statement.”

More in this category: « The junkman, the GSEs, and the wardrobe Disruptive thinking hits NYC »
back to top